In the nailbiting touchdown of Myanmar Airlines flight, no one was injured 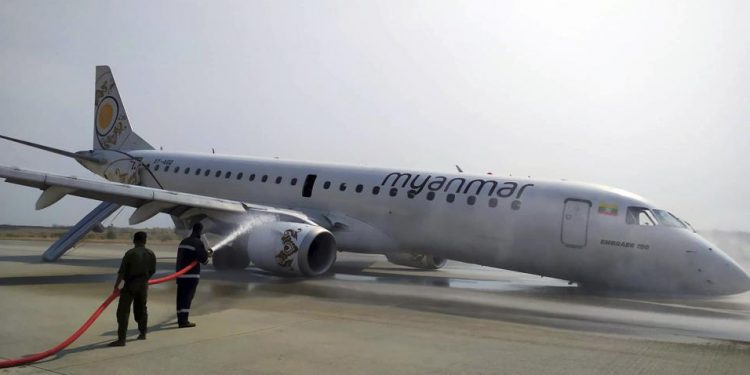 The plane which was grounded without front wheels on Sunday in Myanmar. Image credit - Twitter @htTweets

A Myanmar pilot saved the lives of 89 people on board including 7 crew members after managing safe landing of a Myanmar Airlines flight without front wheels on Sunday.

According to media reports, the pilot of Myanmar Airlines flight UB-103 (Embraer-190 model) had to make emergency landing as his aircraft’s landing gear failed at Mandalay city.

The incident took place at around 9 am.

However, in the nailbiting touchdown, no one in the flight was injured.

Media reports say, this was second instanced of malfunctioning of a flight that has happened within a week in Myanmar.

An NDTV report quoted Ye Htut Aung, deputy director general of Myanmar’s civil aviation department as saying that the pilot had tried repeatedly to drop the landing gear of the aircraft at the front of the plane, first through its computer system, then manually.

The report quoted Aung as saying, “They tried hard twice by flying around twice and asked to check whether the nose wheel dropped or not,” adding, it was a “technical fault”.

“So they had to land with the back wheels… The pilot could land it skillfully,” the report further quoted Aung as saying.

However, there were no casualties, Aung further informed.

After the incident, a video, showing graceful landing of the aircraft before the nose of the jet tipped over and ground to a halt, went viral.

It may be mentioned that on Wednesday, a Biman Bangladesh Airlines plane crash-landed and slid off a runaway while it was landing in Yangon Airport of Myanmar.

In the force landing of the plane on Wednesday, 11 passengers were injured.