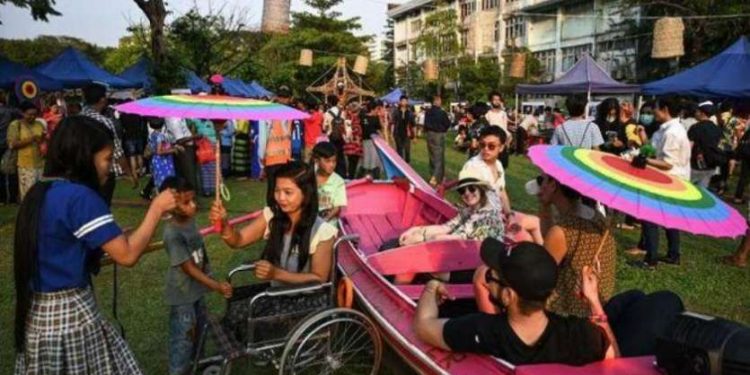 Hundreds of people cheered on Sunday as rainbow-coloured boats carrying LGBT revellers sailed in the waters of Myanmar’s Yangon city in a sign of growing acceptance for the community in a socially conservative country where gay sex remains illegal.

It was the country’s first pride boat parade, a part of Myanmar’s annual LGBT festival, Yangon Pride, organised by non-profit & PROUD to celebrate the fight for acceptance and against the stigma the community faces, reports Efe news.

The first part of the fifth edition of the festival concluded on Sunday and the second will be held over the next weekend.

Around 300 people enjoyed the three cruises on Saturday, about two hours of journey each way along the Yangon River.

“Every year we make (the festival) bigger and bigger and this year we pushed a lot. Every year, we take a few more steps into the city,” said Willem van Rooij, co-director of & PROUD.

Myanmar laws consider sexual activities between people of the same sex illegal which is punishable with up to 10 years in prison .

Nikki Rangoon, a 22-year-old trans woman, told Efe news that the greatest support came from the people despite the government and authorities ignoring the community. This is the fifth year running for the festival.