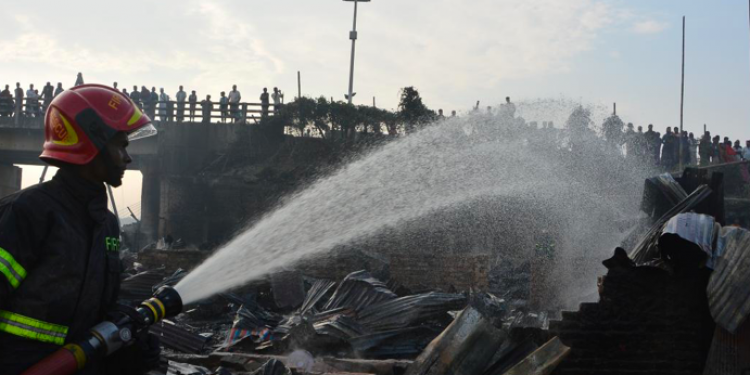 A massive fire at the slum adjacent to the Rajakhali canal at Chaktai in Chittagong city of southern Bangladesh burned down 200 shanties, killing nine people from three families and injuring more than 50 people on Sunday morning.

Ten fire tenders from four fire service units worked to douse the fire that left a thousand residents of the slum in shock after losing their belongings, reports bdnews24.com.

As per the report, 55-year-old Rahima, the wife of Suruj Mia from Chunarughat, lived in the slum for over a decade.

She lived with her three daughters 16-year-old Nazma Akhtar, 9-year-old Nargis, 5-year-old Nasrin and her 10-year-old son Zakir in two rooms and ran a small shop nearby.

A few hours after the incident, the charred bodies of Rahima, two of her daughters and her son were retrieved from their room at the Bhera Market slum in Chaktai.

Rahima’s brother Md Akbar who is a garment worker lived in the same colony and lost all his belongings in the fire. However, he along with his wife escaped with their lives.

The report quoted Nargis, the only survivor of the family, as saying: “I woke up and saw Ma running about inside the room. Later, my brother broke the door and pushed me outside.”

She also said: ‘”Ma also came out but went back inside to get Nasrin. She never came out. We called her several times, but it was no use.”

According to information, Nazma, Rahima’s eldest daughter, was looking after the household and her son Zakir studied at a local school.

Nothing is left of Rahima’s belongings as the fire burned down everything, including the room in which she crossed ten years of her life.

The report also quoted another resident of the slum, Hosne Ara, who works as a domestic worker at different households, as saying that she had been living in a room in the slum and paying a monthly rent of Tk 1,000.

When she heard the screams in the dead of night, Hosne Ara understood that the fire engulfed the slum.

“We survived. That is all. We could not save any of the belongings from our home. The fire devoured everything, including the roof over our head,” said Ara.