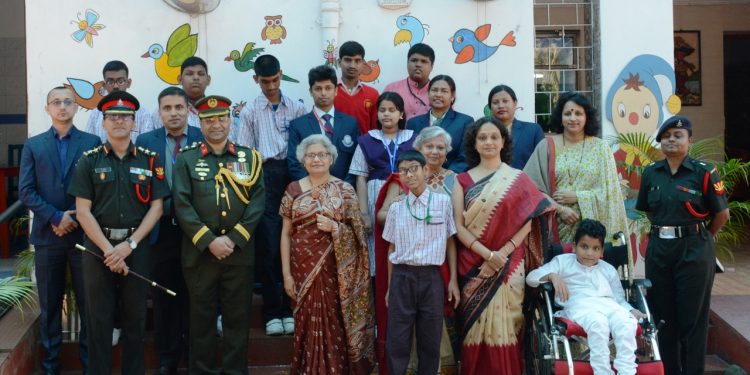 Keeping up the tempo of enhanced interaction between the two Armies, a delegation from Proyash, Bangladesh, led by Col Md Shahidul Alam is visiting Kolkata from February 10 to 14 on invitation by the Indian Army.

Proyash is functioning under the patronage of the Bangladesh Army since July 2006. On February 11, the delegation visited ASHA School Kolkata where Veena Naravane, regional president AWWA Eastern Command interacted with the delegation and presented its members with mementos and gifts.

‘ASHA’, a school for differently abled children came into existence on July 1, 1991 with the aim of providing a combined curriculum of education and therapy as well as counseling and rehabilitation.

Since, the time of its inception, the school has progressed steadily towards its goals. The aim of the school is to ensure an overall development of differently abled children of defence forces personnel (combatants and civilians) with a view to make them self-dependent and contributing members of society.

Eastern Command, based at Kolkata, runs the school under the patronage of regional president of AWWA and has been doing a commendable job in this field.

The team from Bangladesh will be visiting the Indian Institute of Cerebral Palsy (IICP), Amrit Somani Memorial Centre (ASMC) and places of tourist interest like the Zoological Garden, the Victoria Memorial and the Quest Mall.

Visits of such nature involving the younger generation will go a long way in further cementing the bonds of friendship between the two neighbouring countries.