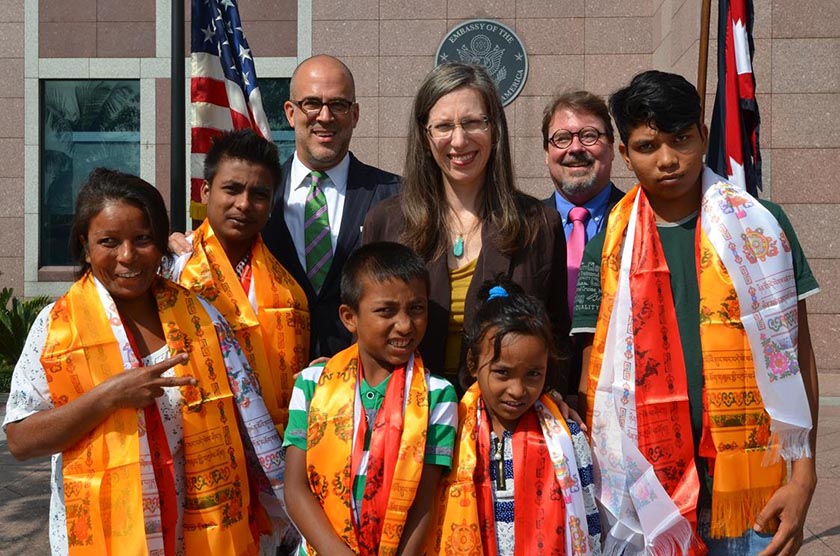 One of the area’s newest police officers is far away from the dusty refugee camp in Nepal where he grew up and spent more than half his life, but he’s committed to his adopted home of Akron.

Damber Subba, who arrived in the United States about 10 years ago, wants to be a bridge between the city’s Bhutanese-Nepali refugee community and Greater Akron.

Subba, 30, is Akron’s first police officer who is a Bhutanese refugee. He was among 12 officers sworn in May 4, Midland Daily News reported.

“I like to call myself a former Bhutanese refugee now,” said Subba, who fled Bhutan with his family in 1991 and lived in a refugee camp in Nepal for 17 years.

“I’m an American citizen, which I’m really proud of,” he said. “We (refugees) were pretty much never considered as human beings on the outside” of the camps in Nepal, dotted with bamboo-and-thatch huts.

He previously worked as a Nepali language interpreter at Akron Children’s Hospital, and trained his brother-in-law, as well as his sister, to work as interpreters there. “I want to empower people in the community,” he said.

While at Children’s, he took some nursing courses at Kent State University, thinking he might help the community as a medical professional.

In July, Subba will celebrate the 10th anniversary of his arrival in Akron. He remembers moving into an apartment with family in Akron, near Nesmith Lake, in 2008.

“I looked at the roof. I looked everywhere,” he said. “There were no holes,” that would allow rain to pour through — as it had in the bamboo house he lived in at the camp.

Subba recalled some of the discrimination he faced in Nepal that led him to reject the refugee label. As a teen, he attended a university in Nepal, outside the camp, aiming to become a physics teacher. Near the university, he rented an apartment, hiding his refugee status from his landlord.

Two months after arriving in Akron, he found work doing manual labor at a local foundry. But 10 months later he was laid off, during the Great Recession.

Soon, he began studying to be an interpreter, with help from someone at the International Institute of Akron, which is in the North Hill neighborhood and works to resettle refugees in the community.

North Hill has become a hub for refugees. Many of them fled Bhutan for Nepal, a small country in Southeast Asia that is squeezed between China and India, in the 1990s during a time of ethnic cleansing. From 2007 to 2017, roughly 2,700 refugees from Bhutan arrived in Akron, after living in camps.