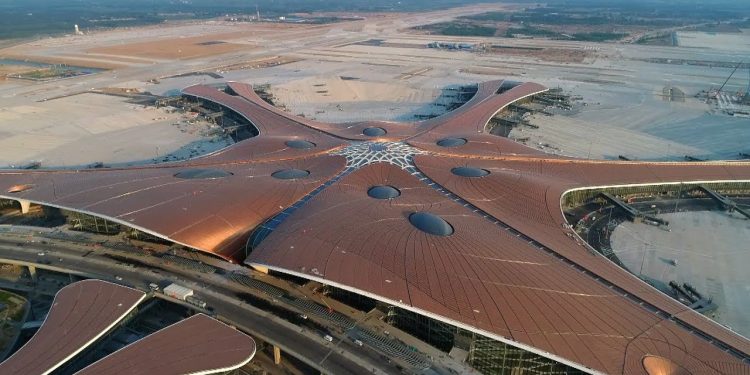 The architecture of the world’s biggest airport Beijing Daxing International Airport is one of the finest examples of a blend of traditional and modern designs.

Moreover, the new airport which opened its doors to the world on September 25, 2019, mostly functions with renewable sources of energy.

As per reports, the airport has been designed by Zaha Hadid Architects, a London based international and design firm founded by an eminent Iraqi British architect Zaha Hadid.

According to the architectural firm, the design of the airport is inspired by principles of traditional Chinese architecture, in which interconnected spaces are organized around a central courtyard.

The area of the terminal building of the airport is 700,000 sq metre.

The solar panels that have been installed around the airport can provide a minimum capacity of at least 10 MW.

Heating is provided by both a ground-source heat pump and waste heat recovery.

The airport also collects rainwater and its water management system employs the natural storage, natural permeation and natural purification of up to 2.8 million cubic meters of water in new wetlands, lakes and streams.

Built with a cost of around $63 billion, the airport looks like a giant starfish shaped infrastructure when viewed from above a flight.

It may be mentioned that China’s astounding piece of aviation infrastructure had already received a footfall of over 3 million passengers just four months after its launch.

The airport is expected to handle up to 45 million passengers per year by 2021 and reach an outstanding 100 million in the future.

Moreover, Poland’s national airline PLL LOT has become only the third European carrier, after British Airways and Finnair, to offer a connection to the airport recently.

According to the International Air Transport Association (IATA), China is set to overtake United States (US) as the world’s largest aviation market by 2030.