The speakers from Bangladesh, Myanmar, Nepal and Bhutan said the normalisation of relations between the two Asian giants augurs well for smaller neighbours.

The regional policy dialogue on connectivity was organised by the India based think tank CUTS International.

“When two elephants fight, the ants get trampled. It is great news that China and India are trying to peacefully resolve their differences at the highest level,” said Dasho Kinley Dorji, former Information and Communications Secretary of Bhutan.

Chinese and Indian troops were involved in an eyeball to eyeball military standoff for nearly three months last year over Doklam in Bhutanese territory. 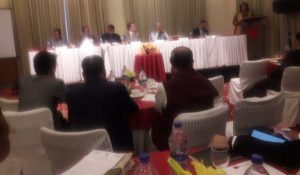 Many in Bhutan felt the tiny kingdom was caught between a nut cracker; so Dorji evinced a sigh of relief over the vibes emanating out of Wuhan.

“We in Myanmar are good friends of both India and China. We want to be friends with both the great countries. It is good the two great countries and their tallest leaders are taking concrete steps to normalize relations. This is good for us and the environment we find ourselves in,” said Myint.

Nepal’s former Commerce Secretary Purosottam Ojha welcomed the process of normalisation that he said may have started with the Modi-Xi summit at Wuhan.

“Regional cooperation and connectivity projects at the end of the day depend on political economy. If India and China are hostile to each other, the smaller countries like Nepal suffer. Hopefully that will not happen if Sino-Indian relations look up,” said Ojha.

“Countries like Bangladesh need both India and China, especially for their development needs. We need the right kind of political environment for economic growth,” said Atiur Rahman.

But Rahman would rather wait and watch to pronounce a verdict on Sino-Indian relations.

“The two nations have geo political visions that can cause conflict, so we have to see how the Wuhan process shapes up,” said Atiur Rahman.

CUTS International chief Pradeep Mehta admitted the importance of geopolitics in shaping the process of regional cooperation and the connectivity projects that are essential to it.