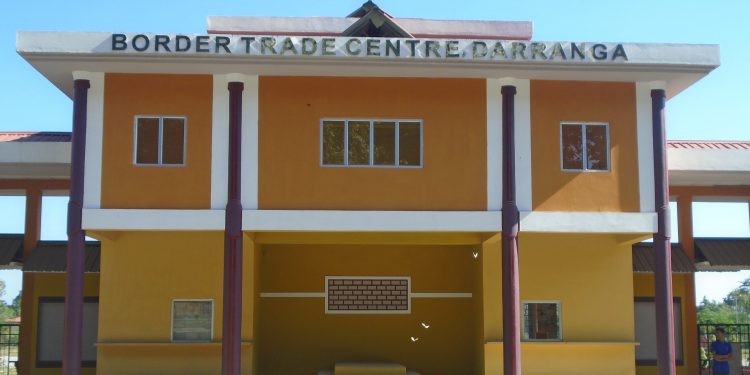 In what can be termed as a new height in trans-border commercial transaction, the Border Trade Centre located at Darranga in Lower Assam’s Baksa district along Indo-Bhutan border has witnessed a record volume of over 500 crore cross-border trade between Assam and Bhutan in a month ever since its inauguration.

Further, it is speculated that the supply of beef and pork could have treble the present volume of trade which is on hold due to lack of infrastructure like a government approved slaughter house.

Talking to this writer, Superintendent of Custom, Darranga Land Custom Station (LCS) RB Das said that more than 100 commercial vehicles, including both exporting and importing passes-through Darranga Border Trade Centre transporting various goods and commodities in a day. He further informed this writer that from 400 to 500 Indian exporters have been actively engaged in cross-border trade through this LCS.

India exports essential items like food materials, LPG, kerosene, petroleum products, including machinery and accessories to Bhutan while it imports potato, gypsum, ferro-silicon and oranges. Apart from these, most of the items subject to the fulfilment of the World Trade Organization (WTO) norms have been exported to Bhutan via Darranga border trade centre.

It must be mentioned here that according to their religious norms, the Buddhists do not kill or sacrifice animals though they consume beef, pork and others. Therefore, the meat to be exported from Assam to Bhutan must be slaughtered and well processed.

However, to do so, there is no infrastructure at the Darranga border trade centre. According to WTO guideline, there must be a government approved slaughter house, a quality testing laboratory staffed with competent veterinary doctors to certify the quality or edibility of the meat before exporting.

Hence, the lack of these prerequisite infrastructures has led to the hold of exporting meat to Bhutan. Eventually, to meet the demands across the border, certain traders have been maintaining the informal transaction of meat through various points of the porous Assam-Bhutan border.  Most of the exported goods are from Guwahati, Kolkata, Panjab and Maharastra.

The typical feature that differs Darranga LCS from others is that the vehicles transporting goods from both the countries can deliver the consignments at its respective destinations according to the provision made by the ‘Agreement on Trade, Commerce and Transit Between the Royal Government of Bhutan and the Government of the Republic of India.’ Therefore, the warehouse constructed at Darranga LCS to facilitate the process of loading and unloading of goods is of no utility.

The writer is an independent researcher on community conflict and livelihood crisis of Northeast India. He can be reached at [email protected]