UN declared June 21 as the International Day of Yoga in 2014, in Bhutan, the day this year was pushed to June 23, a Sunday for convenience of participants 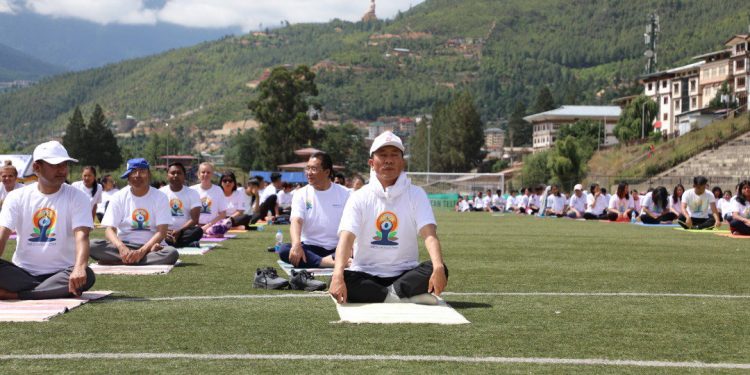 Though it is celebrated world over on June 21, Bhutan deferred the celebration to June 23 which was a Sunday.

The Nehru-Wangchuck Cultural Centre of the Embassy of India in Bhutan’s Thimphu organized the mega yoga session at the historic Changlimethang Stadium in Thimphu.

The session was also graced by Ruchira Kamboj, Ambassador of India to Bhutan, among others, according to reports.

Bhutan in general and Thimphu is experiencing sweltering heat with rise in temperature over the last few days.

The popularity of yoga among the Bhutanese was evident with a huge attendance of participants that turned out to mark the day.

The participants agreed on the fact that in today’s fast life of burden, stress and anxiety, yoga can really soothe the body, mind and soul.

The session was joined by a huge group of students who testified that by practicing yoga, they have stabilized their lifestyle and also could concentrate in their studies.

The yoga teacher at the Nehru-Wangchuck Centre, K V S S N Murthy, said yoga can provide a holistic approach to health and wellbeing. It is also seen as an effective way of combating lifestyle diseases.

Yoga is an ancient physical, mental and spiritual practice that originated in India. Today, it is practiced in various forms around the world and continues to grow in popularity.

Recognizing its universal appeal, the United Nations declared June 21 as the International Day of Yoga in 2014.

In Bhutan, the day this year was pushed to June 23 which was a Sunday for the convenience of the participants.