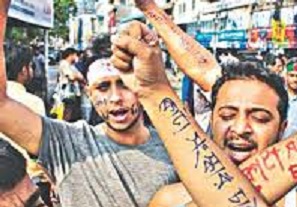 A high-powered Government committee on Monday has recommended abolishing the quota system for Class-I and Class-II jobs in civil service in Bangladesh.

A report published in the The Daily Star stated that the development comes in the wake of months-long quota reform demonstrations that saw arrests of the movement’s leaders and attacks on students. The report further stated that the committee also opined that quota is no longer indispensable to small ethnic groups and physically challenged people.

Earlier on Monday, the seven-member body submitted its report to Prime Minister Sheikh Hasina, suggesting that officials of Grade 9 to 13 should be recruited “completely on merit”. Under the Eighth National Pay Scale, Class-I officials – cadre and non-cadre – join 9th grade positions while Class-II officials are appointed to posts from 10th to 13th grade.

Quota movement leaders welcomed the recommendation, but said they would continue demonstrations until their three-point demand is met. Apart from a gazette on quota reforms, they want withdrawal of all cases against the students who took part in demonstrations over quota or road safety and punishment to those who attacked the protesters.

The committee, formed to “review, reform or cancel” the quota system, unveiled the recommendation six days after quota reformists announced their decision to launch fresh agitations for the gazette. Bangladesh Sadharan Chhatra Odhikar Sangrakkhan Parishad, the platform spearheading the quota movement since February, will stage demonstrations on Tuesday at all universities demanding immediate publication of the gazette.