During a video conferencing, DoNER minister receives COVID19 related inputs in context of Northeast and J&K from former Army Generals and Air Marshals 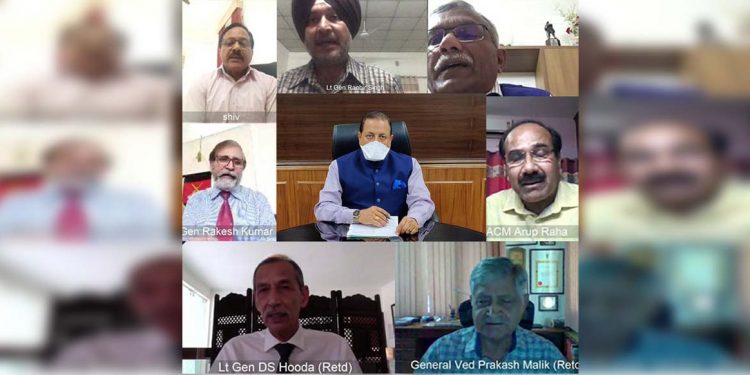 Sealing of the international border has helped Northeast India in containing COVID19 pandemic.

The participants during the interaction appreciated that the entire Northeast region was among the major big areas of India which had gradually come out of the coronavirus (COVID19) onslaught.

They also appreciated the effective administration under the present regime in Jammu & Kashmir which had helped in containing the enormity of the coronavirus spread.

Dr Singh said during the interaction he received valuable COVID19 related inputs in the context of Northeast and Jammu and Kashmir from the former Army Generals and Air Marshals.

“They have first-hand knowledge of the peculiar terrains of both the territories and also a thoughtful perspective,” the DoNER minister said.

He said, “Their inputs and suggestions were not only valuable for improving our efforts in the fight against coronavirus but can also give us an insight of some of the aspects viewed by them from their own perspective.”

Dr Singh updated the former senior defence personnel that in the northeastern region, five out of 8 states have already become Corona-free while the other 3 states have not added any new corona positive case in the last few days, “which means very soon the entire North Eastern Region could become Corona free.”

Updating on Jammu & Kashmir, the minister said, in the entire Jammu region only 15 coronavirus cases were remaining while in Kashmir Valley certain pockets like Bandipora were still showing concern but steadily coming out of it.

About the lockdown, the general opinion was that relaxation should be gradual.

In both Northeast and Jammu & Kashmir, the attitude of the common people was described as favourable.

Views were also expressed about the option of online shopping and online classes.

Received valuable #COVID related inputs, in the context of #Northeast and #JammuAndKashmir, from former Army Generals and Air Marshals. They have first hand knowledge of the peculiar terrains of both the territories and also a thoughtful perspective. pic.twitter.com/yptVOzl3LG