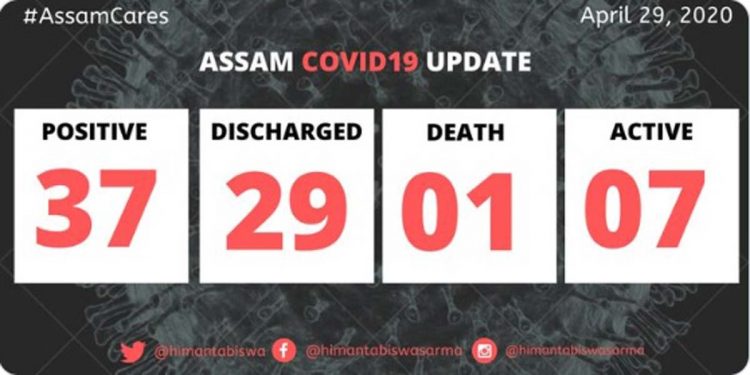 Two more COVID19 patients have been discharged from hospital in Assam after their recovery.

With the release of these two patients, the number of active COVID19 cases in Assam stands at 7.

Assam has so far registered 37 COVID19 positive cases, out of which a total of 29 patients have been discharged while one patient died of the disease.

Both of them were undergoing treatment in Mahendra Mohan Choudhury Hospital (MMCH) at Panbazar in Guwahati.

They were discharged after they tested negative for COVID19 for three consecutive times.

However, they will have to remain under observation of the health department and will be in 14-day quarantine.

Informing about the discharge, Sarma tweeted: “Pleased to share that two more #COVID19 patients – Hazrat Ali of Dhubri and Samirul of Goalpara – are being discharged from MMCH after having tested negative for 3 consecutive times. They go for 14-day quarantine.”

Pleased to share that two more #COVID19 patients – Hazrat Ali of Dhubri and Samirul of Goalpara – are being discharged from MMCH after having tested negative for 3 consecutive times. They go for 14-day quarantine.

Now the number of active positive cases in Assam is 7. pic.twitter.com/HAwIkeYpXS

Health minister Sarma during a press conference in the city on Wednesday said the 16-year-old girl from Salmara in Bongaigaon, who tested positive for COVID19 on Tuesday, is Assam’s first positive case detected during home quarantine.

Sarma revealed that the teenager came into contact with her grandfather, Jamaluddin Haji, who tested positive for COVID19.

But he did not rule out that she might have come into contact with others who carried the virus.

Sarma said he has instructed the Bongaigaon deputy commissioner to look into the case seriously and conduct a proper investigation as “there is the need to find out the source of her infection.”

The minister also announced that he along with his deputy Pijush Hazarika will visit Bongaigaon on Thursday.