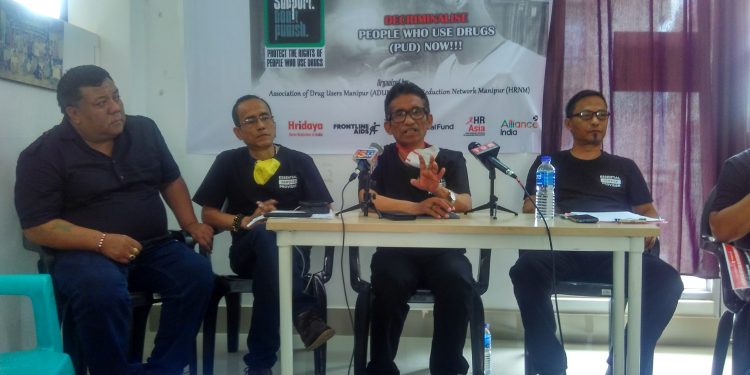 Individuals and like-minded groups who are working on drugs-related issues in Manipur began to observe ‘Support. Don’t Punish’ initiative from Saturday.

It is a global grassroots-centered initiative in support of harm reduction and drug policies that prioritize public health and human rights in a subdued manner.

They have begun the campaign by holding a press briefing so that their message can be shared to masses.

The campaign which seeks to put harm reduction on the political agenda by strengthening the mobilization capacity of affected communities and their allies, opening dialogue with policy makers, and raising awareness among the media and the public, was usually organized since 2013 on June 26 to coincide with the United Nations’ International Day against Drug Abuse and Illicit Trafficking.

The Association of drug users Manipur (ADUM) and Harm Reduction Network Manipur (HRNM) advisors and functionaries of ADUM and HRNM have made their appeal during the day’s event at the office of Social Awareness Service Organization (SASO), one of the pioneer organizations in implementing hard reduction programs in dealing with people who use drugs (PUD) and people living with HIV in the State.

Commenting on the occasion, ADUM advisor H Dinesh expressed the need to reform the drug law in the region instead of giving priority to penalizing measures.

R K Tiken, general secretary,SASO observed that HIV prevalence rate among the people who use drugs (PUD) was 76.9 per cent in Manipur when punitive measures were at height in 1997 but it reduced to 7.2 per cent when harm reduction programs were at height in 2019.

On the other hand, L Deepak of Manipur Network of Positive People who is also part of ADUM expressed concern over the drugs scenario in the State due to lack of proper policy while ADUM co-convenor Raj Nongthombam said the association was formed under the initiative of 17 individuals who are well skilled in providing services right from harm reduction to highest level advocacy etc.

A quarantine centre for drug users to fight community spread of COVID-19 was set up with the support of the government, he said.

“So far we have also provided training programmes to handle the drug issue to many health workers stationed at quarantine centres in Ukhrul and Churachandpur districts,” said Sadananda of ADUM.

“We have also opened a 24×7 helpline for tele-counselling at the quarantine centres,” he added.