#CheckTheFake-28: Do fake news and bad journalism sail on the same boat?

The best way to answer against bad journalism is not violence, similarly the best way to stop fake news is also not possible through violence 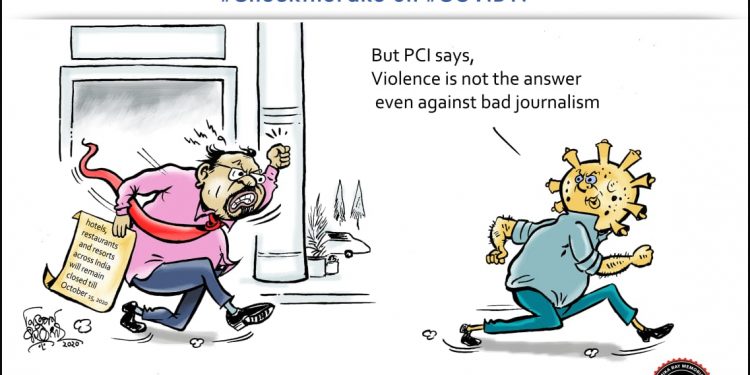 Fake news may also appear in disguise of an altercation with a restaurant owner on the issue of its closure till October 15.

You may drop your plan for candlelight dinner in your nearby restaurant but can’t overlook the quarrel with the owner who seems to make it true by shouting at the top of his voice.

The restaurant owner in this case has not only failed to understand the rumour about the closure of all restaurants and hotels in the country till October 15 but has also failed its second chance to correct it.

Instead of repenting, the restaurant owner has now started to act like omniscient creature.

Also read: #CheckTheFake-26: IPR for fake news lies at #Infodemics, which is a non-answerable entity

In order to convert the fake into truth, he/she may have started a verbal argument that too at the top of his voice to defy any sort of clarification from anyone.

The entire design of fake news is created in the same way; it is produced for multiple sharing over the social media platform in such frequency that its traffic prevails at the top than all other true contents.

This entire design is then also backed by some individuals of some dedicated institutions or organizations that put all its muscle to prove it true.

This may be through physical arguments or muscle power to push the fake news pass its final stage.

And then to oppose it, there may also arise another violent group.

It has been a time of fake news in India along with the world that has spiked its rate with due advantage of COVID19 outbreak.

In such a situation, a fake message of countrywide closure of hotel and restaurants till October 15 has also coincided with another commendable statement from Press Council of India (PCI) in the context of violence against bad journalism leading to the combined-condemnation of both spreading fake news and then trying to release out the frustration against the fake news through violence.

The best way to answer against bad journalism is not violence, similarly the best way to stop fake news is also not possible through violence.

Though, it is important to understand whether fake news and bad journalism sail on the same boat.

FAKE: The Tourism Ministry has asked restaurants and hotels to remain closed till October 15.

The order circulating in social media in this regard is FAKE and has not been issued by the Tourism Ministry. Govt has termed these reports as FAKE — tweeted Prasar Bharati News Services (@PBNS_India) April 8, 2020.