The pledge read as: "I pledge not to use tambul or tobacco in any form including smoking cigarettes, bidis, etc. or chewing tobacco as Gutka, etc. for the rest of my life and also encourage my family and friends not to do so" 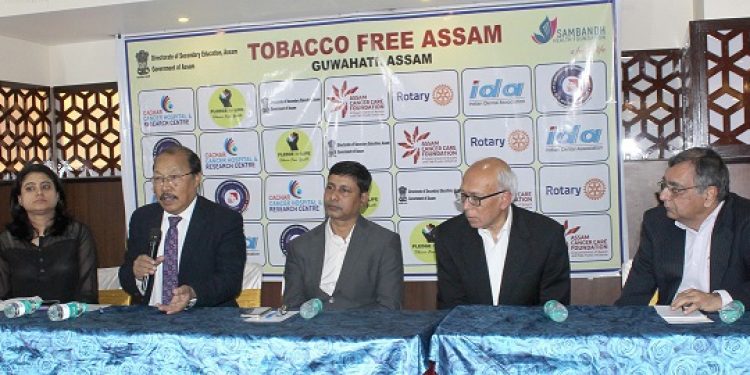 In a landmark initiative ‘Pledge for Life’ by the Department of Education, Government of Assam, students up to Block and Gram Panchayat level in 33 districts of Assam will be administered oath on December 1, 2018.

The Commissioner to Education Department, Assam, said, “Assam has more than 45 lakh students in 50,131 Government schools. We want children to have a healthy life and are protected from the tobacco epidemic.”

The oath, as per the instructions from the Department of Education, reads “I pledge not to use tambul or tobacco in any form including smoking cigarettes, bidis, etc. or chewing tobacco as Gutka, etc. for the rest of my life and also encourage my family and friends not to do so.”

Addressing a press conference in the city on Thursday, Dr. NK Hazarika of Assam Cancer Care Foundation (ACCF), a Tata Trusts initiative, said, “Assam where we have almost half of the adult population consuming tobacco, such steps will go a long way in reducing prevalence. ACCF is investing a lot in cancer cure but our priority is prevention.”

Sambandh Health Foundation (SHF) has developed an android-based application ‘Pledge for Life.’ The schools will download a video which informs how tobacco affects one’s life and family. After sensitizing the students on tobacco consumption with the video, the students will take an oath. Schools are to upload minimum one photograph of the event and number of students who took the oath on the android based Pledge for Life’ application.

Sanjay Seth, Trustee & Head Tobacco Control from Sambandh Health Foundation said, “Pledge for Life campaign will create an atmosphere among students that tobacco is the most ‘uncool’ thing to consume. Research suggests that activities in which children participate are the most effective in convincing them. We applaud the Education Department of Assam in taking such a big step to protect children’s health.”

Tobacco kills more than 13.5 lakh people each year in India. In Assam nearly half of all adults over 15 years use tobacco, compared with 28.6% of India.

Voice of Tobacco Victims (VoTV) patron Dr Ashok Das said, “The number of cancer cases is on rise and the sad part is that now young people are being diagnosed with cancers. If we eliminate tobacco, we can prevent 50% of all cancers. 90% of oral cancers, lung cancers are caused by tobacco. Tobacco is the single-most preventable cause of death. This campaign aims at preventing initiation and this is going to be really an effective step in curbing the menace of tobacco.”

It may be mentioned that Assam has more than 1 crore tobacco users of which 13.3 lac are cigarette users, 18.8 lacs are bidi users and 91 lacs are consuming smokeless tobacco as per the Global Adult Tobacco Survey (GATS) 2017. In the last 6 years the prevalence of tobacco use in Assam has increased 22.65% relatively from 39.3% to 48.2%.