There is gross anomaly in the grading system of National Health Mission: AANA 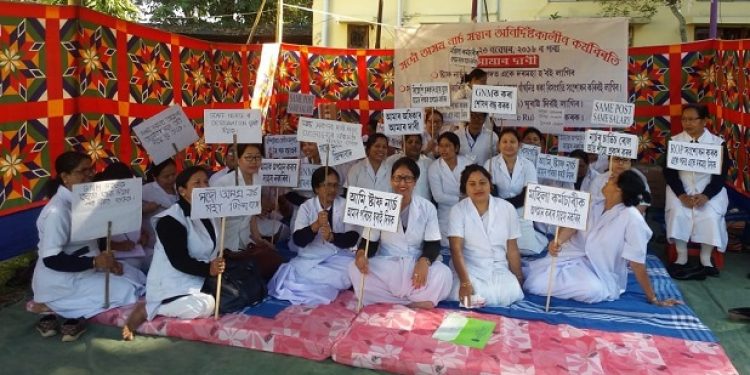 Junu Chetia Dihingia, general secretary of AANA said that they have been neglected since several years.

She said they have been working day and night at the hospital and taking care of patients but the government is not prioritising their issues.

“We have been demanding revival of the designation of the staff nurse, implementation of ‘same post, same salary’s and publishing of service rule of the staff nurse. Despite several pleas the government is not prioritising our issue,” the secretary said.

According to the association, the current salary structure at Rs 8,700 has been proposed for B.Sc nursing degree holders while Rs 6,800 has been fixed as the salary of the ordinary General Nursing Midwifery (GNM).

She said, “AMCH matron Momi Neog is functioning in a arbitrary manner. We demand that the medical administration should take step against her.”

The AANA secretary said on Saturday that a meeting of the association was held at Tezpur Medical College and Hospital where they had various discussions regarding the issues of nurses.

“We had a meeting with health minister Himanta Biswa Sarma in January this year and he assured us that he would fulfil our demands very soon but till date our problems are not solved. Today, we have taken various decisions on our future course of action,” the AANA secretary said.

The association alleged that there is gross anomaly in the grading system of National Health Mission(NHM).