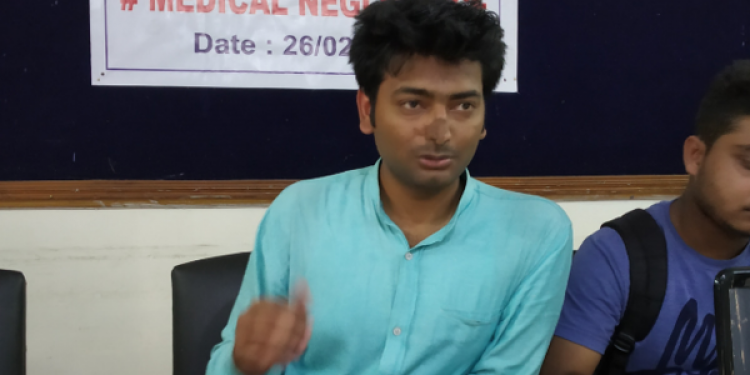 A former student of Assam Engineering College (AEC) has brought charges of medical negligence against a doctor of Assam Medical College & Hospital (AMCH) in Dibrugarh.

The former engineering student identified as Shyam Sundar Gupta has alleged that the AMCH doctor wrongly treated an infection on his nose leading to permanent disfigure of his nose.

A report published by  G Plus quoted Gupta as saying that he had an infection on the tip of his nose in March 2015 for which he had consulted Dr P Dutta, a plastic surgeon at AMCH, who administered an injection directly in his nose.

Talking to the media in Guwahati on Tuesday, Gupta said: “The injection made the condition of my nose even worse and resulted in necrosis of the nose after which my nose began turning black and also swelled up a lot.”

The ex-AEC student further alleged that he was administered the injection without prior consultation or counselling and his or his family’s consent. He also claimed that the doctor also did not explain any complications or adverse effects of the concerned drug.

“After the injection was given, I experienced unbearable pain and my eyes started tearing up as well. I was not in a condition to return home to Digboi from where I had come to Dibrugarh for treatment,” said Shyam relating his account.

He also claimed that in the next few days, the condition of his nose became worse as it turned completely black. He further said the upper layer of the skin started peeling off and mucus and puss also began to discharge from it.

Gupta said he later consulted several doctors and then ultimately decided to move to Chennai for treatment.

“What started off as a simple infection turned this bad only due to the negligence of the doctor who administered the wrong injection,” Gupta told the media.

Gupta further claimed that due to the negligence on the part of the doctor, he had to undergo five reconstructive plastic surgeries in Chennai which cost him over Rs 10 lakh.

“This caused me a lot of physical and emotional trauma. I also suffered and lost a year academically due to the treatment which was ongoing then,” the report further quoted Gupta as saying.

Gupta also told the media that he has already written to the Medical Council of India (MCI) urging it to take action against the doctor. But the MCI referred the case to Assam Medical Council which is yet to take any necessary action even after three years, said Gupta.

Gupta also informed that he has filed a case with the Assam State Consumer Disputes Redressal Commission (ASCDRC).

However, despite repeated attempts, Dr P Dutta could not be contacted.