12,035 people from Karbi Anglong are stranded in different states and cities: Tuliram Ronghang 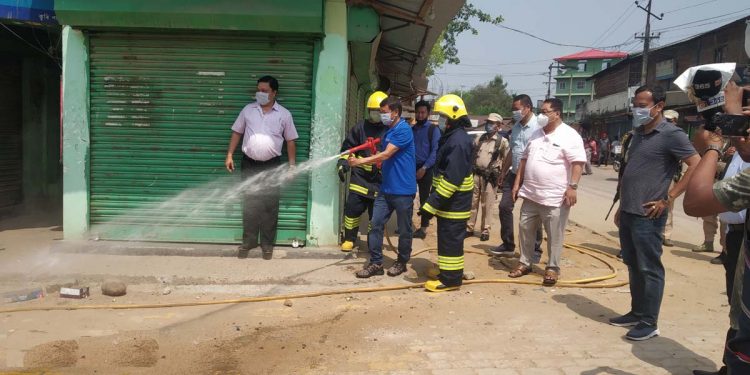 The market was sprayed with disinfectants by a team to contain the possible spread of COVID19 in the district headquarter town of Karbi Anglong on Wednesday.

CEM Ronghang led the spraying in the fish market of Diphu.

Talking to media persons, Ronghang said, “In order to contain the spread of COVID19, we are working hard day and night.”

“With the members of Team Karbi Anglong, we are working together to control the spread of the virus and have urged the people to maintain social distancing,” said Ronghang.

He also informed that in Karbi Anglong, samples of four suspected persons were tested for COVID19 so far, but all of those were found negative.

“This means, till today, there is no positive case of COVID19 in Karbi Anglong,” he said.

The KAAC CEM further informed that all the routes towards Karbi Anglong have been sealed to stop the entry of all vehicles from other states and districts into the district.

“Except goods carrying trucks, no other vehicle without valid permission from the concerned authority will be allowed to enter the district,” asserted Ronghang.

“We may not have the disease, but if people from outside come here with the possibility of carrying COVID19 then we may also be infected,” said Ronghang.

He also urged the people to maintain cleanliness.

“They were out to work as labourers in different states and cities. When these people come back after the lockdown, we will discuss with the state government to keep them in quarantine for 14 days,” said the CEM.

“They will be tested for COVID19 and if found negative then they will be free to go home,” he further said.

On Wednesday, disinfectants were sprayed in the Diphu market, Lorulangso market, Rongkhelan, and Birla.

“Water mixed with bleaching powder and dichloro diphenyl trichloroethane (DDT) is used as disinfectants for sanitizing the areas,” Sarmah said.