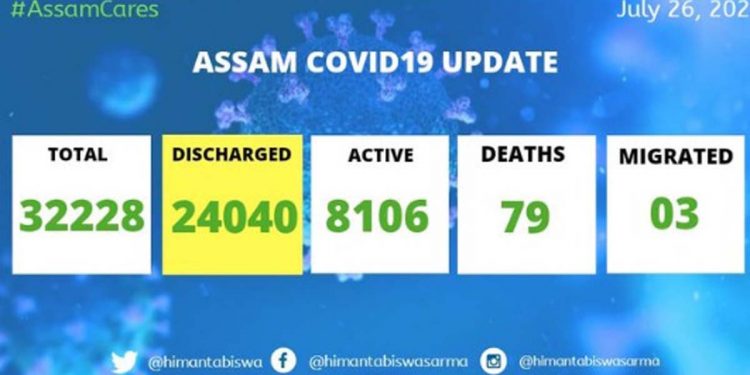 On the day when Assam’s COVID19 tally stands at 32,228, a total of 985 other patients, who were earlier infected by the virus, have been discharged from various hospitals across the state on Sunday.

He also said, “Large number of patients going back home everyday is an outcome of great efforts being put by our doctors. Gratitude!”

9?8?5? patients have been discharged today.

Large number of patients going back home everyday is an outcome of great efforts being put by our doctors. Gratitude!

With the release of 985 patients, the total number of discharged cases in Assam now stand at 24,040.

Confirming the news, health minister Sarma in an earlier tweet said a total of 20,542 tests were conducted in the state in the last 24 hours, out of which 1,142 came out positive for COVID19..

The health minister said the positivity rate is 5.55%.

With the demise of two more positive patients due to infections on Sunday, the COVID19 death toll in Assam has increased to 77.

The COVID19 victims have been identified as 53-year-old Baisakhi Roy from Tinsukia and 50-year-old Birendra Shah from Dibrugarh.

Both of the COVID19 positive patients were undergoing treatment in the Assam Medical College Hospital (AMCH) at Dibrugarh, the health minister informed.