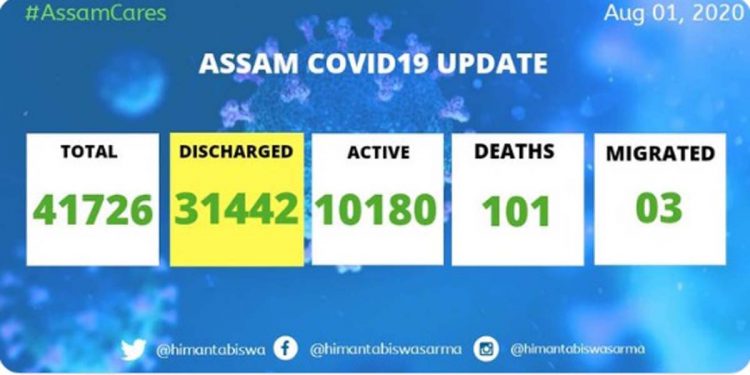 On the day when Assam’s COVID19 tally stands at 41,726, a total of 1,085 patients, who were earlier infected by COVID19, have been discharged from various hospitals and on Saturday.

Sharing the news, Assam health minister Himanta Biswa Sarma in his latest tweet on the state’s COVID19 status said: “Discharge Alert. 1085 patients have been discharged today. Heartening to see that the number of recovered patients is thrice to that of active patients. Kudos, team doctors!”

With the release of 1,085 patients, the total number of COVID19 patients discharged from various hospitals and Covid Care Centres across Assam has increased to 31,442.

Heartening to see that the number of recovered patients is thrice to that of active patients. Kudos, team doctors!

The deadly disease has so far claimed the lives of 101 people.

On Saturday, three more positive patients died of COVID19 infections in the state.

Health minister Sarma expressed his condolence at the demise of the three more COVID19 positive patients due to infections.

“My deepest condolences to their bereaved families. Prayers,” Sarma said.