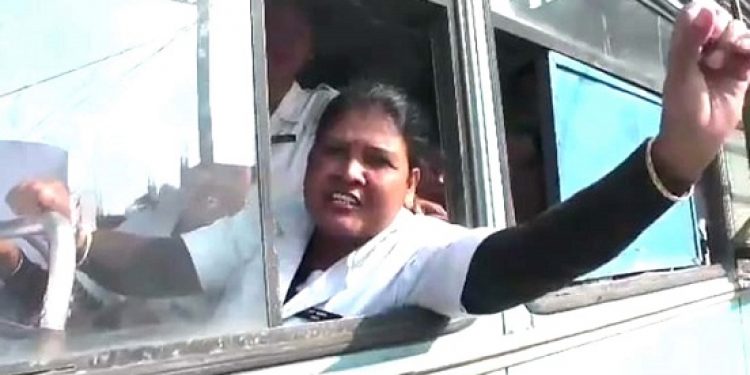 Agitating nurses being arrested by police at Jorhat on November 29, 2018. UB Photos

Meanwhile, the families of patients who died during the strike period alleged lack of competent nursing as the prime cause of the deaths.

It may be mentioned that the beleaguered medical institute basked in the glory of having bagged the best  NACO supported blood bank award for 2018-19 (till November).

A police source said that the arrested nurses kept in the police reserve were released on bail in batches of tens and twenties.

The indefinite strike has been called by the All Assam Nurses Association.

The Deputy Superintendent of JMCH, Nilotpal Bhattacharjee, said that due to the strike by GNM nurses they had sought additional nurses from the district administration and about 10 nurses had been arranged from the Jorhat Christian Medical Centre, better known as Jorhat Mission Hospital.

“When the Mission Hospital nurses arrived by bus, they were obstructed from entering by the striking GNM nurses. Circle officer Debahuti Borah too came to negotiate but failed following which the police detained 200 nurses at the police reserve,” said Bhattacharjee

There are 330 nurses in JMCH. The strike by the GNM nurses in the State over disparity in pay in the ROP of the Seventh Pay Commission entered the fourth day on Thursday.

The allegation that two pregnant women died due to lack of nursing was denied by Bhattacharjee.

“In the first case, the woman Pinky Kaahar from Mohbandha was in hypertension and died on the operating table due to a rare and critical condition, known as amniotic fluid embolism in the afternoon yesterday, but the baby was saved,” he said.

“In the second case today, the mother had been referred from Majuli. Here the baby had already died in the uterus and the woman was hemorrhaging heavily and was in shock. She could not be saved. In neither of the cases, lack of nurses was not the cause of death,” added Bhattacharjee.

Bhattacharjee further said that JMCH was in the news most of the time for wrong reasons but the best blood bank award by the Blood Transfusion Services Assam for the second time (the first being in 2016) had brought cheer to the hospital doctors and staff.