Over 400 enthusiasts run half marathon in Guwahati

A half marathon was organized by Girijananda Choudhury Group of Institutes on Saturday morning in Guwahati as part of its annual event ‘Euphuism’.

The half marathon was flagged off at the campus of Girijananda Institute of Management and Technology at Azara on the outskirts of the Guwahati city and culminated at the Lokpriya Gopinath Bordoloi International Airport (LGBI) at Borjhar. 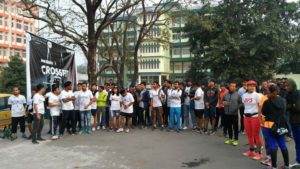 Over 400 enthusiastic participants from across the north-eastern region ranging from varied age groups participated in the half marathon and also praised the initiative of the Girijananda Choudhury Group of Institutes.

Assam govt will appoint 15,000 school teachers in next 6 months: Himanta

Assam govt will appoint 15,000 school teachers in next 6 months: Himanta