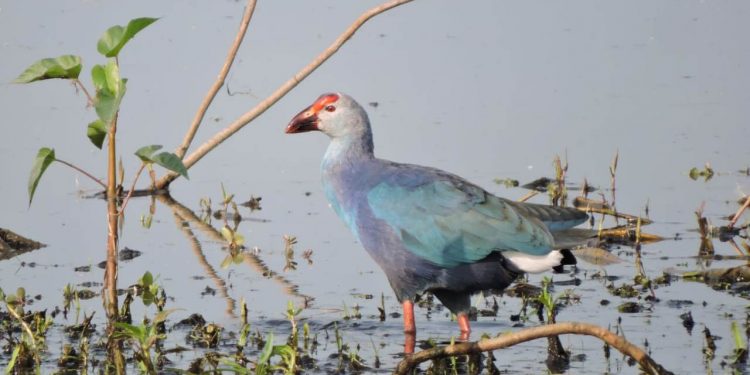 Despite anthropogenic and natural turbulence, many well-known wetlands of Assam, crucial to the ecosystem and biodiversity of the region have become vibrant with chattering and twittering of flocks of residential and migratory birds.

Satajan wetland, one of the major water bodies in North Assam’s Lakhimpur district, becomes a visiting ground to many rare species of local and migratory birds, offering a delight for bird lovers.

Satajan is located on the bank of the Ranganadi river, around eight km west of Lakhimpur town.

Bhaskar Bora, an environmental activist and bird lover says on Tuesday that he spotted a Darter from a distance and got little bit of trouble clicking a photograph of the Little Ringed Polver because he was squatting searching for food in the wetland.

Bora further said Mandarin Duck is very rare in the Lakhimpur district but some claimed that this species was spotted earlier in some parts of the district.

“I have witnessed many species of ducks out of the world’s 20 species in the Subansiri river and adjacent areas,” he said.

People, who are interested in the improvement of wetland ecosystems, have reason to rejoice at the rejuvenation of wetlands in the Nagaon district.

A record number of birds from 70 different species belonging to 22 families have made a beeline to Laukhowa Burhachapori forest in Nagaon district.

“Out of the 70 species, 31 are from migratory species coming from Europe, Central Asia or East Asia. Rare species such as Baer’s Pochard, Great Scaup, Glossy Ibis are spotted in the wetlands of both the sanctuaries,” Kulen Das, a professor at Nagaon Girls’ College, said.

“Apart from this, the Slender Billed vultures and Cinereous Vultures also have been found in Laukhowa Burhachapori sanctuaries,” Das said.

“Tourism activities, started at Katakhal area under Sutipur beat of Gorajan range of Laukhowa Wildlife Sanctuary helped a lot in improving the condition,” he added.

Maguri-Motapung wetland, although it is not a Ramsar site, situated in the Guijan area of Tinsukia district is one of the most renowned water bodies in upper Assam.

The wetland which is about 40 sq km in size is home to many flora and fauna.

This is a very eye-catching destination for environmental researchers, bird lovers; and a huge number of tourists visit the wetland for recreational activities and bird watching.

Nirantar Gohain, an environmental activist from the area, said exquisite Mandarin Duck, a rare bird species, although it is not categorized as endangered, was spotted this year in the wetland.

He said this year the number of birds in the wetland relatively low due to massive pollution in the Maguri Motapung wetland.

The blowout of an Oil India Limited (OIL) gas well at Baghjan on May 27 last year caused pollution at the wetland.

Monoj Gogoi is a Dhemaji based environmental activist. He is also associated with People’s Action for Development.