Community involvement is must to reduce man-animal conflict: Assam CM 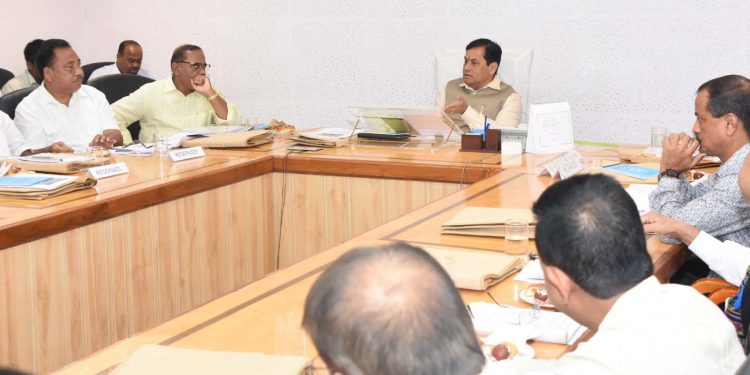 Assam CM Sarbananda Sonowal in the 11th meeting of State Board for Wildlife, Assam at his conference room at Janata Bhawan on Wednesday.

Chief Minister Sonowal said this while chairing the 11th meeting of the State Board for Wildlife, Assam at his conference room in Janata Bhawan.

Issues related to preservation of wildlife and bio-diversity in the State and reduction of man-animal conflicts were elaborately discussed at the meeting.

Sonowal also said there should be a detailed study to mark the existing elephant corridors in the State.

The CM was informed about initiatives such as creation of ‘Whatsapp’ groups with railway staff, the Forest department officials and local community members for reducing incidents of elephant deaths on railway tracks.

The Chief Minister appreciated such moves and called for sustained efforts in this regard.

Sonowal stressed on the need for amendments in the Wildlife Protection Act, 1972 for population control of elephants in the State.

He said unregulated pachyderm population and increased human pressure on the eco-system in the State have resulted in the scarcity of food for the elephants and their consequential venture into the human habitations and agricultural fields.

The CM also suggested planting of banana trees and grasses in the reserve forests and other forest lands to meet the increased food requirement of the elephants.

“He also underlined the necessity to regulate inter-state elephant movement and transferring of State’s elephants to other States. The CM directed the Forest department to ensure timely medical check-ups of the elephants by the veterinarians before being sent to other States on exchange,” said the Chief Minister’s Office in a press statement.

According to reports, compiled by the Northeast Now, a total of 61 elephants had been sent out of Assam between 2008 and 2015 and there is no record of the return of the 61 elephants with the Assam Forest department.

Recently, the Forest department of Assam drew flak from wildlife activists after it granted permission to transport four juvenile elephants from Tinsukia in Upper Assam to the Jagannath Temple in Ahmedabad, allegedly violating Section 43 of the Wildlife (Protection) Act, 1972. Two cases were also filed in the Gauhati High Court.

Sonowal dwelled on the importance of making the young generation aware about their role in preservation of the environment and Assam’s rich biodiversity.

Sonowal directed the Forest department to publish booklets on the State’s environmental resources for distributing in the schools and colleges.

Referring to the State government’s aggressive drive to plant saplings in the State, Sonowal called for sensitisation campaign to make the youth take responsibility for environment protection.

He also urged for increasing the green cover of Guwahati hills so that co-existence of wildlife with human society could continue.

Elevated road project at Kaziranga National Park or the flyover construction over a 38.84 km stretch of National Highway 37 passing through the park also came up for discussion.

The CM directed to ensure submission of Detailed Project Report (DPR) of the same within October this year by PWD (NH Works).

Once complete, it would be one of the top tourist attractions in the country and a prime example for wild life conservation initiatives, he remarked.

Increase of remuneration for fixed pay frontline employees of the Forest department and swift payment of ex-gratia to the victims of man-animal conflict were also discussed.

Besides, raising the amount of ex-gratia to the families of forest guards killed on duty by wild animals, sterilisation of monkeys as a measure of its population control were some other issues discussed in the meeting.