The scheme will provide a monthly pension of Rs 3,000 after the registered farmers attain 60 years of age: Kaito 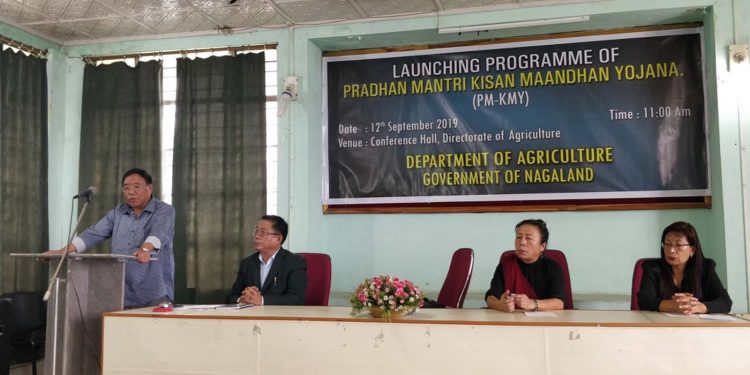 The PM-KMY is a voluntary contribution pension scheme and the people in the age group of 18 to 40 years may register for the scheme, Kaito said while launching the programme at Directorate of Agriculture in Kohima on Thursday.

He said the main objective of this scheme is to create a social security net for the farmers when they grow old.

It will provide a monthly pension of Rs 3,000 after the registered farmers attain 60 years of age, Kaito added.

The minister said there are 1,95,784 farmers registered under PM Kisan Samman Nidhi in Nagaland, who can also avail the PM-KMY scheme.

Kaito said the scheme will benefit the farmers not only when they grow old but will also encourage and boost them morally to work harder when they are young and able.

He urged the department to work sincerely in registering the farmers of the state so that they can benefit from the scheme.

Principal secretary and APC N. Hushili Sema said the scheme is mainly for the grassroots people, particularly the small and marginal farmers, to create a social security for them in their old age.

She urged the department to ensure visibility and transparency in implementing the scheme.

She also asked the department to monitor in the district, block and village level so that awareness is created among the farmers.

Additional director, Agriculture, S. Kivili Achumi said sensitiation programmes on the scheme had been conducted and that the campaign will be carried out in all the districts and sub-divisions for awareness.

He also said registration of the beneficiaries will start when the government sends the details of the internet portal for the scheme.