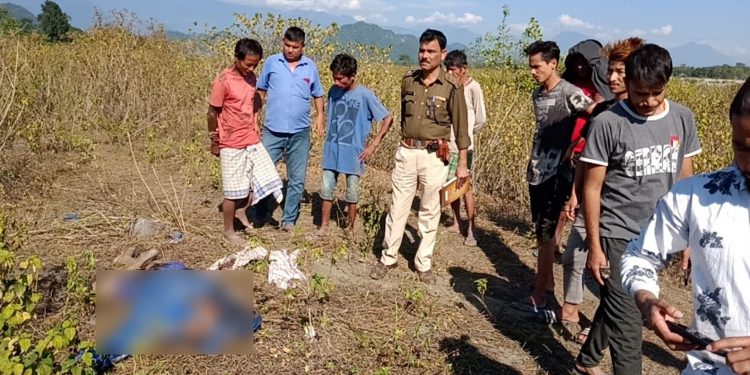 Another villager lost his life in the Nagrijuli area under Baksa district as an isolated wild jumbo trampled him to death.

According to villagers, at about 10.30 pm on Sunday, an isolated wild elephant – which has also been named as ‘Laden’ – entered Pub-Goibari village in Nagrijuli along the Indo-Bhutan border and unleashed terror.

The villagers left their houses and took shelter in safer places.

In the meantime, a person, namely Rajkumar Hajong left his house and moved towards river Bornodi, but the wild elephant attacked him and trampled to death.

On Monday morning at about 10 am, some villagers found his body lying on the ground along the river Bornodi.

As the news spread, a large number of villagers immediately gathered at the spot and some of them informed it to the Nagrijuli police outpost and the forest office in the area.

After receiving the information, a team of police led by Ranjan Das, in-charge of Nagrijuli police outpost and a team of forest officials rushed to the spot and recovered the body of Hajong.

Later the body was sent for conducting a post-mortem.

A huge herd of wild elephants was also seen moving near Goibari village.

It may be mentioned that in the last two months, three persons have been killed by wild elephants in the Tamulpur Sub-division of Baksa district.

The people of the area alleged that no measure has been taken neither by the government nor the forest department to tackle the man-elephant conflict.

The people of greater Nagrijuli area have been spending sleepless nights to save their lives and property.

More than 100 villagers have been killed by wild elephants in the last 15 years only in the Tamulpur Sub-division in Baksa.

As per reports, more than 14 wild elephants have died due to the man-elephant conflict in the district.