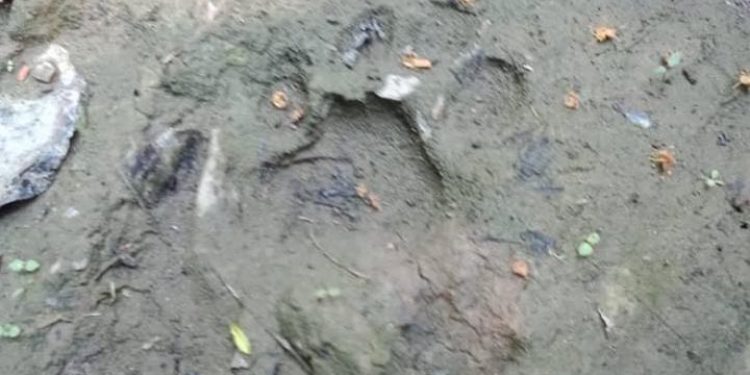 Pugmarks of an adult Royal Bengal tiger in Poba reserve forest in Assam-Arunachal boundary has been reported by officials of Assam forest department.

The forest officials of Jonai territorial forest range noticed the tiger pugmarks during routine patrolling in the deep jungles of the reserve forest in Sirung portion under its Leku Beat office recently.

The wildlife enthusiasts of the area are delighted with the reported spotting of the pugmarks of a Royal Bengal tiger in Poba reserve forest.

Various sections of people of Dhemaji district including students’ union, NGOs and senior citizens’ body have been demanding the authority to declare Poba reserve forest as a ‘wildlife sanctuary’.

However, the forest officials of Jonai are allegedly not showing much interest in the reported spotting of tiger pugmarks.

The local forest officials have ended their responsibility just by sending a report with photograph of the pugmarks to the divisional forest office at Dhemaji.

Earlier in November, 2017, the forester of Jonai range noticed such pugmarks of Royal Bengal tiger on the wetlands in the reserve forest.

The forest officials after a week rescued an orphaned leopard cub from a dwelling house near Telam BG railway station along the Assam-Arunachal boundary.

It was said that the leopard cub entered the area from the forest in neighbouring Arunachal Pradesh in quest of food after getting separated from its mother in Arunachal hills.

Assam forest officials said that though big cat species like leopards, leopard cats and jungle cats are found in Poba reserve forest and its adjacent areas, but Royal Bengal tiger is usually not found there.

Poba reserve forest is adjacent to the Daying Ering Wildlife Sanctuary in Arunachal Pradesh located on the outskirts of Pasighat town and there is an elephant corridor linking Poba reserve forest, Daying Ering Sanctuary, Kobuchapori island and Dibru-Saikhuwa National Park in Upper Assam across mighty Siang river, a major tributary of the Brahmaputra in Assam.

The upper portion of Poba reserve forest falls under Pasighat Forest Division in Arunachal but the lower portion falls in Assam under Dhemaji forest division.

Notified in 1914 by the then British government, Poba reserve forest was once suitable habitation for many rare and endangered animal species.

But the reserved forest is now under constant threat due to denudation of green cover and random hunting, poaching and illegal collection of forest wealth by unscrupulous traders.