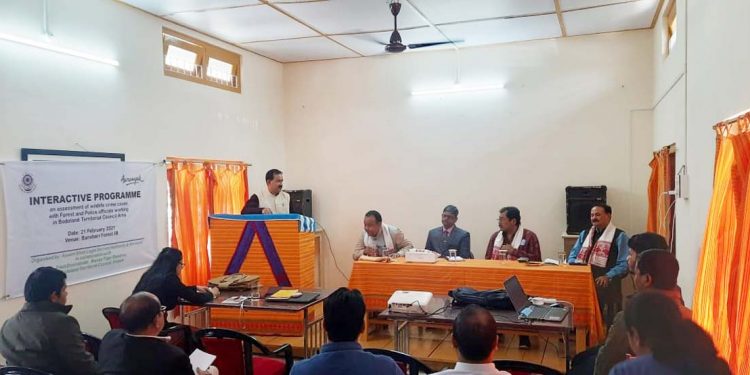 Low conviction rate in respect of wildlife crime cases has remained a cause for concern as it was reflected during an interactive session on wildlife issues in Manas National Park.

The interactive session was organized at Bansbari Range of Manas National Park on Sunday by the Assam State Legal Services Authority (ASLSA) in association with Aaranyak and in coordination with the forest department of BTR.

Addressing the session, Anindya Swargiray, the head of forest department in BTR, said even as there has been a rise in incidences of wildlife crimes in the BTR area, the conviction rate in respect of these offences has remained abysmally low.

He said encroachment of forest and wildlife protection areas has been alarming in the Bodoland Territorial Region (BTR) areas besides the incidents of hunting of wild animals.

Swargiary said unless there is high conviction rate, it would be difficult to prevent such crimes against wildlife.

He observed that negligence on the part of the ground staff dealing with wildlife crimes resulted in lesser conviction of the guilty in the court of law.

The forest official underlined the need for raising the awareness level about the relevant laws related to wildlife crimes among the ground staff to achieve the goal of higher conviction rate.

The field director of Manas National Park and Tiger Reserve, Amal Chandra Sharma, discussed in detail about the continuing combat against wildlife crimes in the vast Manas landscape.

He flagged the highpoints achieved as well as the hurdles encountered in the process.

He spoke on various provisions in Wildlife Protection Act to deal with such offences and also highlighted the utility of the investigation handbook brought out by Wildlife Crime Control Bureau (WCCB) in dealing with wildlife crimes by the investigating agencies/ officers.

Barua highlighted the mandate of ASLSA and significance of past wildlife crime prevention workshops organised by ASLSA in coordination with Aaranyak in other parts of the state.

He said legal service is a very wide concept and lauded the involvement of frontline staffs for their involvement in exercising relevant laws for checking and dealing with wildlife crimes.

The chief executive officer (CEO) of Aaranyak and rhino conservation expert of international repute, Dr Bibhab Kumar Talukdar said: “We at Aaranyak give priority to protection of wildlife because it has become a matter of national security.”

“Now, we need the cooperation of the judiciary more than ever before to see that the cases related to wildlife crimes get the justice they deserve in the court of law,” Talukdar added.