Need to find out issues concerning the local communities in Dima Hasao for not allowing their lands to be used for mining: Sonowal 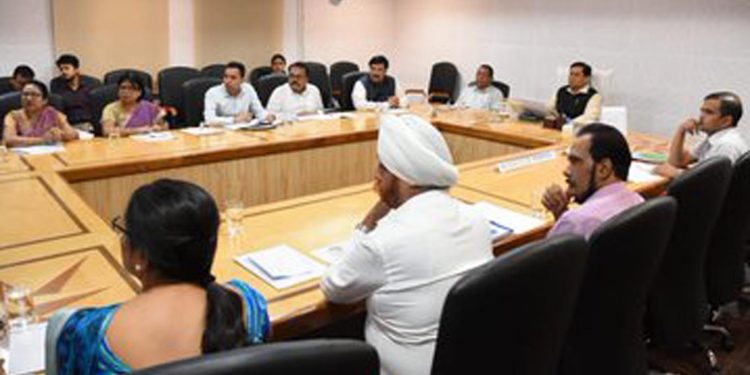 A view of the review meeting of mines and minerals department of Assam at the CM's conference room at Janata Bhawan on Wednesday. Image credit - Twitter

Assam chief minister Sarbnanda Sonowal on Wednesday had a review meeting with official of the mines and minerals department of Assam at his conference room at Janata Bhawan.

The chief minister issued instructions to the department officials to conduct public hearing within next 15 days for using limestone mines in Dima Hasao and Karbi Anglong districts.

He also stressed on the need to find out the issues concerning the local communities in Dima Hasao for not allowing their lands to be used for mining.

Sonowal directed the department to be more visible and make its presence felt among the masses so that people could be aware about the ambit of the department’s works.

He said the District Mineral Foundation (DMF) trusts must work properly in carrying out development works in mine affected areas as mandated by the Mines and Mineral (Development and Regulation) Amendment Act 2015.

Sonowal asked the department to give a presentation with pictures about such activities in the next meeting.

CM Shri @sarbanandsonwal took a review of the Mines and Minerals Dept at Janata Bhawan, Guwahati.

Departmental achievements, ongoing projects and various issues were discussed in the meeting. pic.twitter.com/br0ufeCq6t

In the meeting, there was discussion on the possibility to empower the deputy commissioners (DCs) to oversee the extraction of minor minerals like sand and stone on behalf of the mines and minerals department in their districts.

The matter of removal of the non-forest lands from the purview of the forest department for mineral extraction was also discussed.