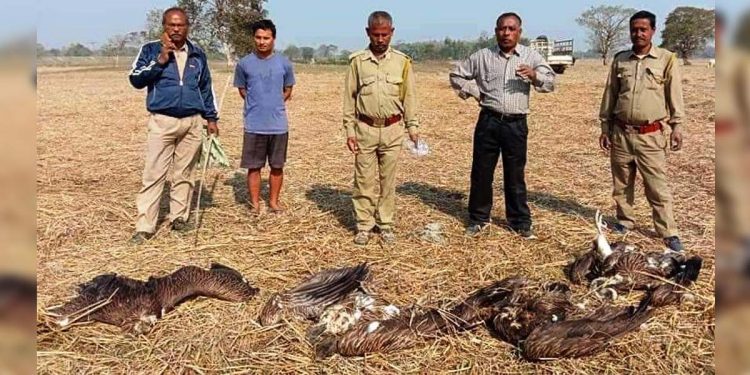 The vultures which were found dead in Dhakuakhana. Image credit - Northeast Now

Four Himalayan Griffon vultures were found dead on the bank of a wetland at Dhakuakhana in Lakhimpur district on Sunday morning.

The incident took place near the embankment of river Korha on the bank of La-Joi wetland under Madhya-Dhakuakhana Gaon Panchayat.

It was believed that the vultures fed rotten dead cattle dumped openly in that area.

The dead vultures were taken away by the forest department officials on Sunday for conducting post-mortem.

The apathy by the villagers in disposing of their dead cattle has been blamed for regular deaths of vultures in that region.

In March 2015, a total of 30 vultures died on the banks of Kuwabari wetland near Hiloidari and Kowargaon village in Dhakuakhana for the same reason.

In March 2017, a total of 17 vultures including three critically endangered Slender Billed vultures were found dead in Dhakuakhana.

The population of vultures in Assam has declined at an alarming rate due to open dumping of dead cattle and its consumption by the bird.

As per the report of the Union ministry of environment and forests & climate change, more than 97% of vultures have disappeared from India.

Himalayan Griffon (Gyps himalayensis) and Slender billed vulture (Gyps tenuirostris) are among the nine species of vultures that are found in India.

Autopsy reports of such dead vultures reveal that the cause of fatality is a drug called Diclofenac, an anti-inflammatory used by farmers and veterinarians to ease pain in cattle.

This lethal drug has been banned by the Indian government in 2006 but it is still found in the market undercover.