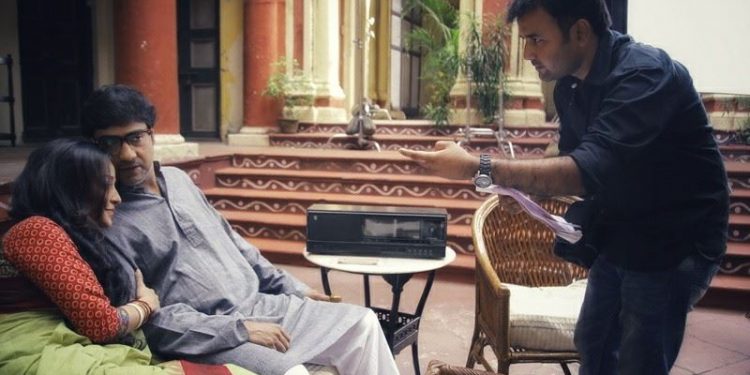 Born in a typical Bengali family of Silchar town in Barak Valley of South Assam, Saptaraj Chakraborty has grown into a filmmaker who is slowly and surely carving out a niche for himself in the world of cinema. He actually belongs to the gen next of visual story tellers who are making their presence felt in the online medium also referred as Over The Top(OTT) platform.

Saptaraj has come a long way from making short films and music videos alongside Shiva Varma, a college senior whom he met as an engineering student in Rajasthan, to directing award winning actors like Raima Sen and Kaushik Sen in a short thriller, ‘Mehmaan’ for the online streaming platform Zee 5.

In fact, the duo is also behind ‘Insured Death’, a quirky short film besides a six-part web series, ‘The Presage’ which deals with the supernatural, currently streaming on Sony Liv.

The author caught up with Saptaraj in an interesting chat about the kind of films he believes in when the filmmaker visited his home town recently.   Excerpts:

For a majority of people in India, the film industry is synonymous with Bollywood. But you have carved out your career so far mainly on the online medium. What is so special about the medium?

Saptaraj: The one thing which appeals to me is that the online medium gives you the freedom to portray reality as it is. I mean there is no need to bother about things like whether the content is fit for a certain kind of audience or not. At the same time it is easy to get tempted and resort to gimmicks like infusing a heavy dose of sex or violence just to increase the number of views. But I am a firm believer that only honest storytelling will connect with people. With great power comes great responsibility, I guess.

Would you like to name any film or filmmaker who has been an influence in your life?

Saptaraj: My life changed after watching the film City of God. But before that I remember watching the film Satya as a kid along with my brother on cable television. Another film which comes to mind is Dil Se. I mean in those days you were used to watching the usual love stories which the Hindi film industry had to offer. But films like Satya which depicted a completely different side of life made a huge impact on me.

Quite interestingly, life came a full circle when years later you got the opportunity to work with Ram Gopal Varma, the man who had directed Satya.

Yeah, it was an amazing experience. RGV had made a web series, Guns and Thighs and I had directed a portion of it. He is really passionate about filmmaking. I along with the other assistant directors used to sit with him and discuss films for hours. In fact he was more than willing to share his experiences from an illustrious career.

Tell us something about the vision behind Atarkya Creatives, a audio-visual content creation venture which you co-own with Shiva?

Saptaraj: Even in our college days we were very clear about one thing; we always wanted to make our kind of cinema. The name Atarkya itself means beyond arguments. Luckily we are living in an age when people are ready to embrace new ideas. The aim is to make more micro budget films that are content driven.

You had no formal training in filmmaking and grew up in a remote part of the country which had very little to do with films when you started out. How on earth you ended up choosing filmmaking as a full time career?

Saptaraj:  Luckily my parents are culturally enlightened people. My mother is a trained singer and right from my childhood I was inclined towards arts. I used to do painting but hated the idea of taking part in competitions. I was a bit rebellious in that sense and later a point came in life when I too was caught up in a rat race.  Like everybody else I enrolled myself into an engineering college in Jaipur, but deep inside I wanted to break free.  As they say, fate conspired and I met with a senior in college who was into filmmaking and my journey in films began.

Butterfly Effect, a short film which you made as a student got selected and screened in the Jaipur International Film Festival which in a sense kick-started your career. Isn’t it?

Saptaraj: Back in those days as students we were toying with ideas for making something for the film festival when vacations got declared. A friend had lent us her digital camera and suddenly we realized that the college hostel, which was the most happening place for the rest of the year, had turned spookily silent as everybody had gone home. We then shot Butterfly Effect, which is based on the theme, out of body experience.  It got screened and our joy knew no bounds when people started talking about it.

Tell us something about the upcoming projects you are working on and what is your ultimate dream as a filmmaker?

Saptaraj:  I am currently working and pitching some ideas including one for a web series, a crime thriller based in Northeast. Things are still in a preliminary stage at the moment. Let’s see how things pan out eventually. My ultimate dream is to one day may be direct a Hollywood film!