Basumatary was first introduced to the people of Assam as an author and not a filmmaker. His romantic comedy novel 'Chocolate Guitar Momos' (2011) was an instant hit among the millennials 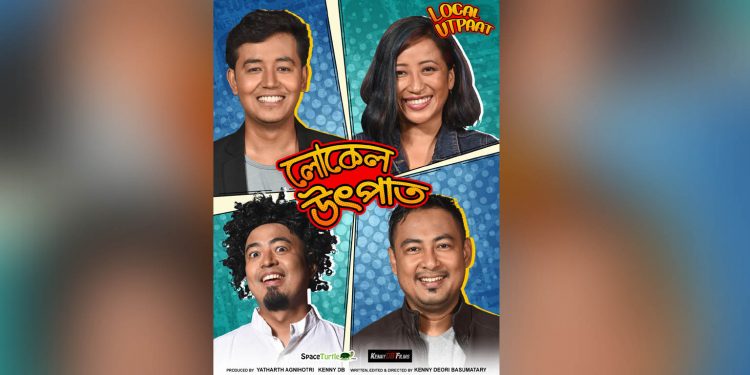 Filmmaker Kenny Basumatary has begun a crowdfunding campaign to meet the post-production expenses and release of his latest film ‘Local Utpaat’.

The actor-director-writer started the campaign through Wishberry.in and so far he has been able to generate Rs 4.3 lakh of the total required amount of Rs 10 lakh.

Basumatary’s three films- Local Kung-Fu (1 and 2) and Suspended Inspector Boro has been laughter riots and the audience has enjoyed his style of filmmaking.

In the Wishberry page, Basumatary has written in details as to why he is crowdfunding for Local Utpaat.

“I am crowdfunding for two reasons- one, since the decline of the industry around the mid-2000s, with the exception of 3-4 films and the recent megahits of the last two years, Assamese films generally haven’t recovered their budget,” Kenny wrote.

“Even ours haven’t. The primary reason being the lack of theatres. A film can only get 40-60 screens – so the box office returns (with a few recent exceptions) might not be enough to cover the cost of the film and it becomes too high a risk for any one or two persons to take,” he added.

“Secondly, it’s tough to find those one or two ideal financiers who will invest in a film without interfering in casting, scripting etc,” he said.

“So it’s much safer to ask a few hundred people to contribute a little bit and help out,” he reiterated.

The talented filmmaker, in fact, sold his Mumbai apartment to recover the money he had invested in his three films.

In an interview with a Guwahati-based news portal, the filmmaker form Assam thanked the audience for showing faith in him and loving his previous films.

Basumatary was first introduced to the people of Assam as an author and not a filmmaker.

His romantic comedy novel ‘Chocolate Guitar Momos’ (2011) was an instant hit among the millennials.

He, however, always had an inclination towards filmmaking and this led him to direct ‘Local Kung-Fu’, which was initially showcased to a close group of friends and
families.

Being inspired by the positive reviews, Basumatary went on to release it on the big screen and the movie became an instant hit in 2013.

The sequel, Local Kung-Fu 2, released in 2017 also received an overwhelming response from the viewers.

The story was adapted from Shakespeare’s ‘Comedy of Errors’.

His third instalment- Suspended Inspector Boro was released in 2018 and the movie also received positive reviews.

The filmmaker is giving his best of efforts to promote ‘Local Utpaat’ and says that the fate of the film will decide whether he will make a fifth film or not.

The talented actor has also acted in Bollywood movies like ‘Shanghai’, ‘Ragadesh’, ‘Love Ka The End’, and ‘Mary Kom’.

He was last seen in 2019 Assamese film ‘Bornodi Bhotiai’ and his role of a civil servant was loved by the audience.

Kenny Basumatary is hopeful to release ‘Local Utpaat’ in September later this year.