India watches DD and continues its fight against COVID-19

With the re-broadcast of its old iconic serials on Doordarshan during the 21-day lockdown, it has again reinforced its position in the heart of Indians.

According to a recent report by Broadcast Audience Research Council India (BARC), Doordarshan has achieved its objective to help people keeping themselves at home, by broadcasting the old classics.

According to BARC, the re-telecast of ‘Ramayan’, garnered the highest ever rating for a Hindi GEC show since 2015 when BARC started measuring TV audience.

In the wake of the countrywide lockdown for 21 days to deal with COVID-19 outbreak, the Public Service Broadcaster had decided to re-telecast the mythological serial of the 80s – ‘Ramayana’ and ‘Mahabharat’.

While there had been a public demand for the re-telecast of these epics, the decision was taken with a view to providing engaging entertainment to the home-bound audience.

Similarly, based on the public demand, the pubcaster has also introduced some of its other famous serials like Shaktimaan, Shriman Shrimati, Chanakya, Dekh Bhai Dekh, Buniyaad, Circus and Byomkesh Bakshi on DD National.

Along with Mahabharat, it has also introduced Alif Laila, Upanishad Ganga on DD Bharati.

After the re-telecast of both the epic serials started on March 28, on DD National with two episodes of each epic every day, the pubcaster was flooded with accolades on social media including the high appreciation by a lot of celebrities.

All the star casts of these iconic serials have started posting their own videos and comments praising the effort of Doordarshan and appealing to people to watch them again on television.

While ‘Ramayana’ is telecast twice at 9 am and 9 pm without any repeat on DD National every day, ‘Mahabharat’ is also shown twice with fresh episodes at 12 pm and 7 pm on DD Bharati daily.

The entertainment line-up in the afternoon on DD National starts with Circus at 3 pm, Shriman Shrimati at 4 pm, Buniyad at 5 pm.

Similarly, the evening band on DD National starts with Dekh Bhai Dekh at 6 pm followed by Shaktimaan at 8 pm and Ramayan at 9 pm and ends the day with Chanakya at 10 pm.

Doordarshan has also scheduled Alif Laila at 10.30 am on DD Bharati and Upanishad Ganga at 6 pm on the same channel.

The significant increase in interest and potential viewership for Doordarshan content has enabled the Public Broadcaster of India to discharge its responsibility towards making the nationwide total lockdown successful as India stays home to fight the COVID-19 pandemic.

Show timings of the shows in DD national and DD Bharati 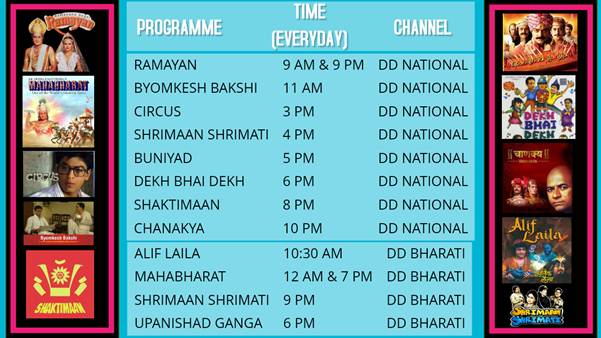 Meghalaya: MeECL engineers’ body to stage protest on Tuesday against suspension of engineer