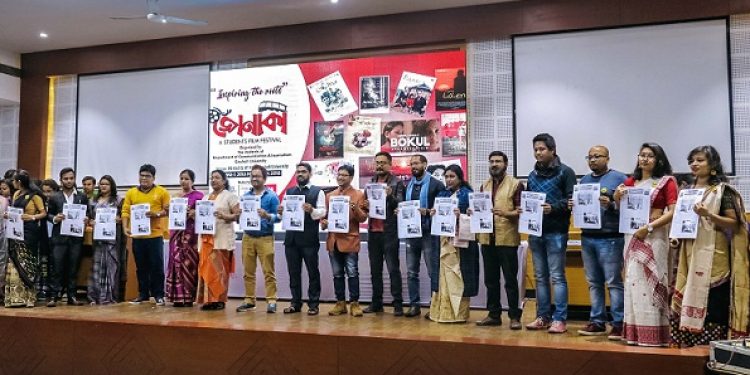 A view of the launch of 'GU Times' on the occasion of the Jonaki Film Festival. Image - Northeast Now

The first edition of Jonaki Film Festival came to an end on November 30 at the PD Hall of Gauhati University in Guwahati.

The two-day film festival witnessed a number of footfalls of more than 2000 cine lovers.

Also read: 13 films from Northeast to be screened at film fest in Gauhati University

“I am extremely delighted by the event ‘Jonaki’ Film Festival as it is a great event and a ray of hope for the regional film Industry as such kind of events are much required in the present time to have better understanding of the films,” said Jahanara Begum, a noted actress.

This event witnessed the release of ‘GU Times’, a leading community newspaper of GU, unveiled by the esteemed directors, faculty members and other dignitaries.

While delivering the audience at PD Hall, Ankuran Dutta, Head of Communication and Journalism Department, GU, said, “I congratulate all the students for their hard work and effort for this event. It was an event by the students, for the students and of the students. I also thank all the directors for accepting the invitation and being present here this evening.”

He also announced the upcoming programme of the Communication and Journalism Department, GU – Quantitative Research Programme – which will be held from December 19 to 21 and also International Folk Media Festival in February.

He also thanked the Gauhati University authority for extending all the support for the event.

During this event, the guests were felicitated. It also marked the presence of some great filmmakers and actors.
Subrat Dutta, chief coordinator of ‘Jonaki’ Film Festival said in his speech that the festival named after Assam?s first cinema hall Jonaki of Tezpur in Sonitpur district.

“We have chosen the festival’s name as Jonaki to convey the message that the existence of cinema halls and the need of good audience are equally important like the other main factors for the growth of a film industry. The sole motive of the festival is to promote language films from Northeast among the students as well as provide a roadmap for aspiring filmmaker to make films about its people,” Dutta added.

The director of ‘Orang’ Suraj Duwarah said that the Jonaki Film festival should continue. “It is a good initiative by the students of Department of Communication and Journalism, Gauhati University. I hope that other colleges and universities of Assam will also organise such events,” Duwarah added.

‘Jonaki Film Festival was inaugurated by Vice Chancellor Dr. Mridul Hazarika. The festival was based on the theme ‘Inspiring the Roots’.