It gives me immense joy to see Bulbul Can Sing reaching such a diverse audience: Rima Das

The special screening of the movie was attended by Stratford East Picturehouse and 888 Film Club which was followed by an all-female panel discussion on topics around deafness, LGBTQ+ and identity with British Sign Language interpretation.

Rima Das expressed her joy to see the film reaching to a diverse audience. 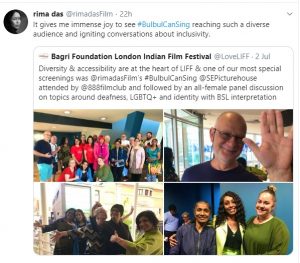 She twitted, “It gives me immense joy to see #BulbulCanSing reaching such a diverse audience and igniting conversations about inclusivity.”

Bagri London Indian Film Festival 2019 which is the UK and Europe’s largest South Asian film festival has premiered many Indian indie films along with the celebration of its 10th birth anniversary.

The festival showcases their richest ever assortment of the entertaining and thought-provoking line-up of independent films.

The movie was also premiered in the contemporary world cinema section at the 2018 Toronto International Film Festival.

Bulbul Can Sing is a coming of age film revolving around the individual identity and social conflict.

The story of the film is about an Assam village girl named Bulbul and her two best friends Bonny and Sumu who had to face the social moral code against their search of individual identity.

Meghalaya to showcase root-bridge on R-day

Meghalaya to showcase root-bridge on R-day