Assam: How and where to watch ‘Aamis’

A still from the movie

Assamese filmmaker Bhaskar Hazarika’s movie Aamis is all set to be released on November 22 next.

The film will be screened in movie theatres across Assam from November 22 onwards.

It will also be shown in select theatres across Bengaluru, Delhi, Kolkata, Mumbai, Pune and Shillong from November 22 onwards.

One can book their tickets online for the film from the site moviesaints.com for watching it in the select theatres across Bengaluru, Delhi, Kolkata, Mumbai, Pune and Shillong.

However, people from the rest of the country can watch the film online (pay per view) on the site moviesaints.com. 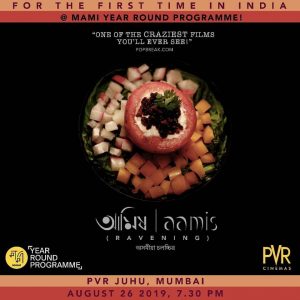 Aamis revolves around the relationship between a married paediatrician Nirmali in her late 30s and a young PhD student Suman.

The film depicts the lonely life of Nirmali, whose husband, a senior doctor, spends most of his time working leaving her alone to take care of their son.

However, later, the film shows how Nirmali meets Suman, who introduces her to a world of fresh, wild, meat-based delicacies and the way they bonded over food after which their relationship takes a dark and bizarre turn.

Aamis was screened at many prestigious film festivals across the world.

Transgenders may be recruited as combat officers!