'Aamis' is a bold, brilliant and beautiful picture where both beauty and brutality is uncompromised

A scene from the movie

Bonding over a shared interest and likeness for food and flesh, Nirmali reveals to a much younger Sumon that when with him, she feels like eating only meat. “How strange!” she adds.

If not the most proper word, ‘strange’ would also not be entirely unjustified to describe the kind of film that Aamis is. Built on a very usual premise, Aamis is a kind of May-September story of love where relationships shape and people unite over their love for food but later it takes such a turn for the nightmarish that it separates itself from every other film that its subject collides with.

After a chance encounter, the widely separate worlds of both Sumon and Nirmali come together.  As the distance between Sumon and Nirmali gradually comes from sitting facing each other to beside each other, the urge to define their unlikely relation leads them towards a dark path of unimaginable consequences. This is where Aamis differ from the lot.

Although writer-director Bhaskar Hazarika retains the feeling of familiarity in the first half, Aamis makes a shocking departure from anything homogenous when it seems to have arrived at a dead end. Dead end because, the characters are self aware of their identity and ascribed status in society and also acknowledges the restrictions and conditions they are unwillingly living under. It is their own conscience that has overpowered their wants.

With Nirmali denying the burgeoning of any non-platonic desires when confronted by Jumi and Sumon returning from mid-way failing to leave the city, they have resisted a change several times. Now there’s nowhere further for the story to go.

In a scene where the two characters realize the importance of their inhibitions more than ever before is when they walk out from a stage show. This scene also highlights Bhaskar Hazarika’s employment of visual language to communicate.

As Nirmali and Sumon share a departing exchange with helplessness written all over their faces, a queue of people from inside the auditorium break into the scene and poetically separates them by passing between them as they continue looking fixedly at each other.

The society would never allow them become one but more than that they wouldn’t allow themselves to become one. It is this repression of their unfulfilled desires that pushes them towards paraphilic horrors.

Aamis is a bold, brilliant and beautiful picture where both beauty and brutality is uncompromised. In a story where desire is equated with hunger and hunger with meat, this is a film where meat which has been used as a mcguffin ends up having the greatest and ghastliest significance of all.

The artistry of Bhaskar Hazarika’s work reflects in the transcendental approach of exploring the core human emotions with deftly handled stream of consciousness shots of both the characters.

The sensual gratification of Nirmali when she tastes a unique recipe, or the rhythmic depiction of Sumon’s intimate details and a subsequent lyrical sequence where both the characters meet several times over a precious exchange are all dealt with great style and affection. The gush of wind that swipes Nirmali out of her every known sense and sensibilities almost brushes us.

Bhaskar Hazarika along with his cinematographer Riju Das captures this heat of the heart in all its naivety and sanity languishing over temptations. Faces glowing over received notifications, the interchange of intense gazes, the pleasures derived, or imprisoning the looks of an uneasy Sumon and uncomfortable Nirmali post the revelation and their psychological decay that follows, the head and shoulder shots stays on their reactions and acts as a window to their world.

The music by Quan Bay is one of the strongest points that made the film plausible. Refraining from the trappings of regional music, the score aims for the mood rather than the context in which the story is set in.

On editing, the sharp cuts between Nirmali’s dry heaves on the roadside as she recalls the food she ate the previous night in an extreme close up shot and her immediate dreamlike memory makes the experience more unsettling.

Daringly setting his story of a socially looked down upon relationship in the context of our socio-cultural milieu, Bhaskar Hazarika creates two different worlds within the same film.

A mouth-watering concept that quickly descends into terrifying wickedness, Aamis is a delicious horror in disguise of a love story. On one side it’s benign but firm mannered Nirmali, on the other a receptive Sumon. More consumed by love with every step taken together, Sumon’s flavourful recipes of fruit salad with meat as toppings, boiled egg and steamed rice cakes with meat fillings arouses Nirmali like never before.

The surprising combinations like fruit and meat that don’t seem to go together are perfectly analogous to their controversial affair. While the items in the dishes fold in together perfectly, it is their fancy that yens for a touch! It is only when they are visible to each other’s eyes not anymore shaking off their socially constructed images and differences which in consequence make their self imposed restrictions invalid that they could extend their touch.

It’s a certain kind of obsession both the characters share in common. Sumon is autogenously attracted to meat and later towards Nirmali; conversely Nirmali’s obsession is more reactive of kind visible in her hesitance to eat food without the use of spoon and fork and rinsing her mouth repeatedly on another occasion.

As she comes in possession of the deranged, her obsession progresses to addiction. From silently deriving pleasure out of Sumon recalling the diverse kinds of meat people consume and an odd change in her behaviour after trying aphrodisiac bat meat to the menacing look as she stares at a roasted chicken, her obsession shifts and Bhaskar Hazarika excels in this transformation of Nirmali. Chomping on a leg piece unable to resist, her fierce hunger even compels her to use her hands in another instance.

A fable on human beings as social animals, Aamis examines the grey area between right and wrong and deconstructs our notions of morality by questioning if he who sins is really of the devil? If not, what then is the proper way to address Sumon’s predatory act or is Nirmali’s rapacious ultimatum acceptable?

Or maybe we are what we eat, but again is it enough to justify us? When the rooster Sumon looked after for a month was eventually eaten, he was sad beyond doubt but also hungry beyond guilt! Above all, who are we to decide the terms of what is to be considered normal and what not, what is permissible or incorrect?

Also, there’s no sensible way to unravel how, when Jumi’s long term emptiness fills up. The sympathy of the film lies not on these two partners in crime but goes out for our social and moral framework which is nothing more than an interim phase to lockdown whatever it is incapable of perceiving. 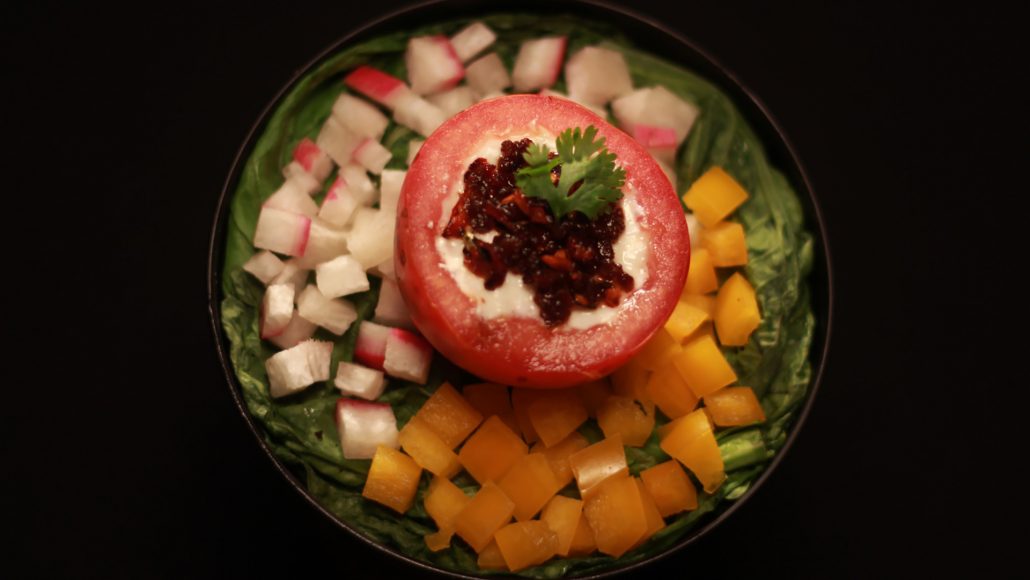 This explains the cryptically conceived title – Aamis. Outside of its standard usage as the Assamese term for non-vegetarian used to stand in for both ‘food’ and the ‘eater’, Aamis here refers to the one’s having a voracious appetite who seeks to challenge the edifice of ethics and raven like an animal.

First time actors, Arghadeep Baruah’s quirky grin and very casual delivery of dialogues make the character of Sumon natural and Lima Das’ mystical eyes displaying a wide range of emotions and her eccentric appearance and delirious portrayal of Nirmali forms the soul of the film.

A slight shortcoming of the film was how promptly the characters assume and jump to the conclusion that any suspicious movement of behaviour be a ‘could be affair’. Also, the playful and amusing dialogues were verbose in places.

Of forbidden colors and sinister tones, Aamis is a sadistic infusion of hyperrealism layered with analogies and symbolism throughout with foreshadowing and two very special sequences where music takes over us and everything else.

A beautiful symbolism is the egg dish arranged in the shape of yin and yang which perfectly suits the theme of dualism explored in the movie. Eagle eyed viewers will also notice a yin and yang locket hanging on Dr Elias’s car which Sumon drives. The title of the film, the way it is put with an animated bar vertically expanding between ‘Aamis’ written in Assamese and English is itself a nod to the divide between two similar entities yet contrasting entities.

The relationship between Sumon and Elias also helps uncover another hidden shade that tells a different story when approached from Elias’s perspective. Making a quite comment on the universality of love, social taboos and transgression, consequences of repressed desires and unacknowledged identities, Aamis is a thought provoking and emotionally moving film that leaves a mark on our heart, mind and appetite too.

Aamis is anything we desire and everything we fear beyond the relics of time, the judgment of which the director has left open for us to consider with the consequences of Sumon and Nirmali not shying away from us.

Kalpa Jyoti Bhuyan can be reached at: [email protected]

Lockdown on, are some ministers in Assam sleeping?

Fighting the invisible: How science of genomics is helping us know novel coronavirus?

#CheckTheFake-10: #Infodemic can make you sick even while maintaining social distance

Meghalaya Cabinet to decide on lockdown extension next week