INTERVIEW| ‘Aamis’ is not based on facts and is purely fiction: Bhaskar Hazarika

'Every person commits sins because of his/her own circumstances' 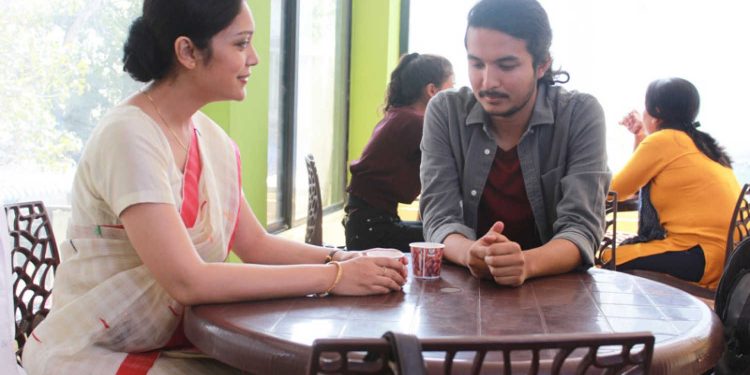 A scene from the movie ‘Amis’

Bhaskar Hazarika is an Indian (Assamese) filmmaker best known for his national award winning Assamese movie Kothanodi (2015). Hazarika’s second movie Aamis, which has already created waves, hit the screens in Assam on Friday (November 22). Nominated for the Tribeca Film festival and Jio MAMI 21st Mumbai Film Festival , Aamis is a journey of two lovers entwined to each other by the love of meat but what happens next is unanticipated, an unusual turn of events.

Here are excerpts from an interview with Hazarika.

Would you like to tell us about your journey to the filmmaking industry?

I come from a very small town called Dergaon in upper Assam’s Jorhat district. I was sent to a boarding school at the age of 7 and I have lived outside Assam ever since. I always knew I had to make films, by the time I was in my teens I was pretty certain that this is what I want to do. I went abroad, did my masters in filmmaking, returned to Delhi and was in the film and TV industry struggling for some years until Kothanodi happened. Initially I was planning to do a short film on the murder of Tejimola when some of my friends suggested I do a feature film and Kothanodi was the result.

What was the inspiration behind Aamis?

This movie is not based on facts and is purely fiction. The idea behind it was to create a genre film, mix two genres where you start telling a love story and slowly manipulate the audience into believing that they are watching a love story until it takes them to an unexpected twist in events. We wanted to create this kind of an experience and that is why we chose this subject.

“Aamis is about empathy for the sinner because to sin is human”, would you like to elaborate on it.

Nobody is born a sinner. Every person commits sins because of his/her own circumstances and so we should not be too quick to judge anybody. Sometimes, it’s the upbringing other times its familial discord, the reasons could be many but we tend to forget that life can go downhill for us too. The sinner is in all of us. In the end, we are all the same.

What do you feel is the common determinant in global cinema?

I think films driven by good content are usually appreciated worldwide and themes which are universal in nature connect us. In Indian artistic tradition is the navarasa where the stories are based on emotions like fear, peace, love etc. As long as we keep making movies based on all these themes, the stories will work beyond boundaries whether it is Mexico, Pakistan or India, emotions are the same.

Do you let your personal philosophies reflect in your movies?

Well, I try not to let my personal philosophies intervene in my work. But, since we work in a creative field, it becomes inevitable at times. Some of it might seep into my work but I am a professional writer and director so I do not let my personal beliefs interfere with the story that I want to tell. But if I feel that a story or idea is obtrusive to my ideas of the world then probably I wouldn’t even start doing it.

After winning a national award for Kothanodi and shot into international fame, how do you manage to remain grounded?

I do not feel filmmaking is a mission; it is just a profession to me. I want to be good at my job and filmmaking is my career. I don’t like to be engaged in glamour and projection and I have never been fond of it, in fact I try to avoid all that. I don’t like attention on myself rather discuss my work.

This was the first time my film was screened in Guwahati International Film Festival and the response was phenomenal. There were people standing in the queue for hours to watch the movie and it was sad a lot couldn’t get in to watch the movie but yes, it was a great experience.

I would like to ask the cinema lovers to please be aware of the movies that release, keep themselves updated on different genres of movies. Often independent movie makers like us work on low budget movies and we are unable to promote the movies, so it is the cine lovers’ job to help us and look out for films of all kinds.