Matt Bacon from USA, Pade Netpakdee from Thailand, Manmohan Thapaliya & Jazzmandu from Nepal, Abiogenesis to perform at the festival 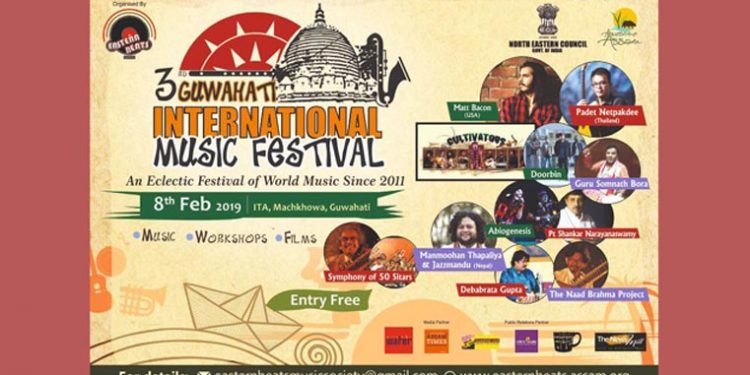 A promo of the 3rd Guwahati International Music Festival.

A host of internationally acclaimed artistes and musical bands are all set to mesmerise Guwahatians during the 3rd Guwahati International Music Festival scheduled to be held on February 8, 2019.

The festival of world music was first organised in the city in 2011.

The event, to be organised at Pragjyoti ITA Centre for Performing Arts, Machkhowa, will be inaugurated by Ram Muivah, secretary, NEC.

Apart from music, workshops will also be conducted and film to be screened.

Organised by Eastern Beats Music Society, the festival is being supported by the North Eastern Council (NEC), Government of India and Assam Tourism.

The list of performance does not end here. The Symphony of 50 Stars from Assam and Kolkata will also enthrall the Guwahatians with their magical performance.

There will also have performance by Subhankar Hazarika and solo performance by Tushar Bhuyan in memory of Assamese youths Abhijeet Nath and Nilotpal Das, who lost their lives in an unfortunate incident of mob lynching.

It is expected that the auditorium will be jam-packed as the entry for the event will be free.

The main function will be started at 5 pm, but the workshops and lecture-demonstration will be held at the seminar hall of Pragjyoti ITA Centre from 10 in the morning.