Manashi was awarded with the winner’s trophy and a cheque of Rs 25,00,000, on Sunday night.

While Nilanjana was adjudged as the first-runner up Shruti was named the second-runner up.

The runners up received a cheque of Rs 10,00,000 and all the top six finalists were awarded gift hampers from Cadbury. 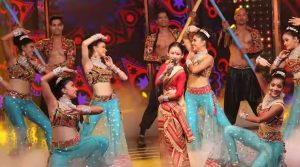 Excitement exuberating in her voice as 11-year-old Manashi on her feat stated, “Firstly I would like to thank the people of my village who always believed in my talent and supported my dreams. Having said that, I am truly blessed to have mentored under the guidance of Palak Muchhal because not only did she invest time and energy in me, she truly inspired me in my journey. The Voice India Kids has given me a reason to believe that talent finds its due platform. I have gained a lot on from this stage – friendship, love, respect and a teacher whom I will always treasure.”

Hailing from Udmari village near Kalaigaon of Darrang district in Assam, Manashi picked up singing from a tender age of three years while listening to her mother. She also comes from a musically inclined family. While her father Anupam Saharia is an expert in musical instrument, her mother Jitu Moni Saharia – a housewife holds Masters in Music from Bhatkhande Music Institute Deemed University.

Meanwhile, a festive atmosphere has surrounded her native Udmari village near Kalaigaon where the exuberant villagers are proud of Manashi Sahariah who brought laurels to the State.

The Voice India Kids Season 2 was launched in November 2017 and aired on &TV.

Apart from Palak Muchhal, the show was judged by Himesh Reshammiya and Shaan and hosted by Jay Bhanushali.