A two day national seminar on ‘Ethno-Eco-Mytho Facets of North East Indian Writing in English’ was held at the Central University of Tamil Nadu recently.

The seminar was held on February 8 and 9 last at the University premises in Thiruvarur. The national level seminar witnessed distinguished educators and litterateurs from the North-east participating in the talk and putting forward their knowledge and ideas.

Padma Shri awardee and an eminent English author Arup Kumar Dutta enthralled fellow authors with his speech on the historical, political and social responsibility of north-eastern writers towards advancing the cause of the region and giving it a global platform.

“It gives me immense pleasure to see that during my many years as an author advocating for the cause of North-east Indian writing, it is the first time that a central university located 2,000 kms away from home, has organized a national level seminar on the ecological and mythological allusions in literature pertaining to northeast India. This is only reflective of the progressive mind-set of the university authorities and the people of south India,” Dutta said.

Speaking on the contributions of Indian writers from the North-east, Professor Kailash Chandra Boral from the University of Hyderabad, emphasized on the role played by The English and Foreign Languages University, Shillong Chapter, and its 38 year-long research deeply embedded into culture and literature of the North-east.

He also lauded the contributions of Arup Kumar Dutta and discussed the works of other north-eastern writers such as Dhruba Hazarika, Maman Dai, Temsula Ao, Mitra Phukan and Kynpham Sing Nongkynrih in the seminar. 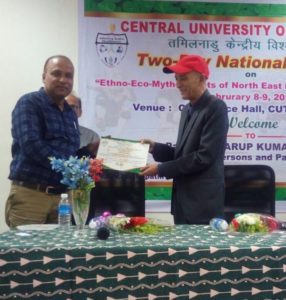 Professor Bijay Kumar Danta from Tezpur University presented a paper on various aspects of novels from the northeastern region.

Assistant Professor from the Department of English, Assam University (Diphu campus), Dr Bishnu Charan Das discussed the cultural significance of Boro, Khasi, Dimasa, Naga, Karbi and other tribes have on the literature of the North-east.

Representatives from other universities and colleges such as Sikkim Central University, Pondicherry Central University, Behrampur University also presented various research papers and talks on the importance of novels, poems and other works from the north-eastern part of India and its impact on modern Indian literature.

On the last day of the seminar, the students of the Central University of Tamil Nadu mesmerized audiences with their renditions of borgeet, goalporiya lokageet and bihu.