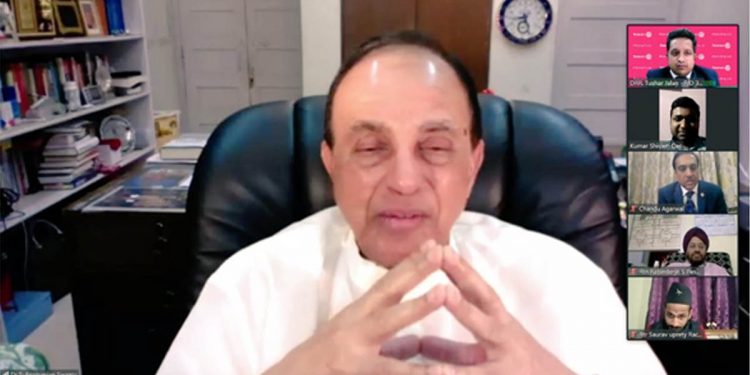 Subramanian Swamy speaking at the webinar

The National Testing Agency (NTA) on Thursday evening had announced that NEET UG 2020 will be held on September 13.

But, senior BJP leader Subramanian Swamy on Friday afternoon tweeted that an emergency meeting has been called to discuss the matter of JEE Main and NEET 2020 examination dates.

Swamy tweeted that he has already reached out to Education Minister and asked him to conduct the examination after Deepavali.

The senior BJP leader decided to intervene after he was approached by students after the Supreme Court dismissed the plea to postpone the examination.

I a have already tweeted as well as conveyed to Education Minister that NEET exams should be after Deepavali. Minister is holding an emergency meeting. Let us see. I was asked to intervene by you all at a very late stage after SC had delivered its judgment

Details on the meeting of the Education Minister could not be ascertained till the filing of this report.

The NTA on Thursday evening had announced that the NEET 2020 exams will be held from 2 to 5 pm on September 13.

While states across India are caught on the back foot because of the pandemic, the dates were undecided for NEET 2020 and JEE Mains exams.

But, following a Supreme Court directive on August 17, it had announced that the NEET 2020 exam will be held on September 13.