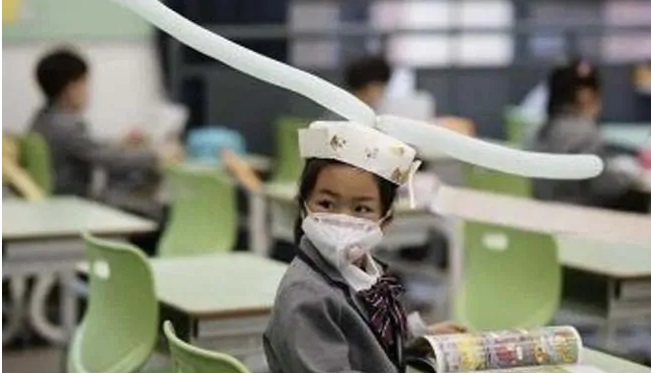 China’s Hangzhou school drew attention due to its innovative way of ensuring that its students follow the rules of social distancing.

Schools in China are opening with normalcy returning to the country after the coronavirus pandemic.

With the rules of social distancing still being followed strictly in China, schools are ensuring that students also adhere to it.

However, one school in China’s Hangzhou drew attention due to its innovative way of ensuring that its students follow the rules of social distancing.

The pictures of first grade students of the school being made to wear cardboard or paper hats with three foot long horizontal plumes to ensure that they remain at a distance from each other has gone viral on Twitter.

A professor of the Duke University Eileen Chengyin Chow who shared these pictures explained that the hats worn by the students were similar to the headgears that were worn during the Song dynasty rule in China.

During the rule of the Song dynasty, officials were made to wear headgears with long horizontal plumes to prevent them from conspiring quietly with each other at court.

“First graders back to school in Hangzhou, with social distancing headgear The long horizontal plumes on Song Dynasty toppers were supposedly to prevent officials from conspiring sotto voce with one another while at court—so social distancing was in fact their original function!,” Chow tweeted.

China on Sunday claimed that there are no remaining cases at hospitals in Wuhan city in the county’s Hubei province.

The global coronavirus pandemic began in Wuhan in the month of December last year.