In science stream, Jorhat recorded pass percentage at 92.43 pc, next to Sivasagar at 93.42 pc 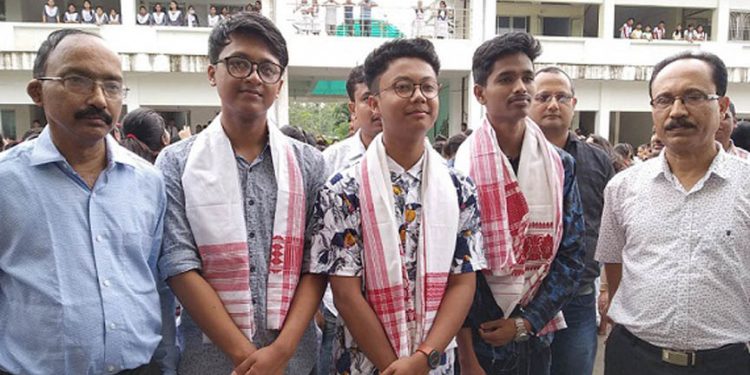 Nine students from three private institutes brought laurels to Jorhat district in Assam by securing ranks in the list of Top 10 in the Higher Secondary Examination 2019.

The HS examination results were declared on Saturday by the Assam Higher Secondary Education Council (AHSEC).

Jorhat district bagged the second position among the districts across the state in terms of pass percentage in the science stream.

The pass percentage in arts stream last year was 84.21pc.

Crescent Academy has topped the list of rank holders in Jorhat with four students securing positions.

Kanyashree  Bhagovaty got the third rank in arts with 374 marks, Satabdee Saikia and Shameen Sultana got the sixth and seventh positions respectively with 469 and 468 marks respectively out of 500.

Nibedita Gogoi from commerce stream of Crescent Academy got the second rank with 468 marks.

The institute in earlier years has also thrown up rank holders but this is for the first time that a student secured a rank in commerce.

The principal of Crescent Academy, Jita Barua, said she was not only happy with the number of rank holders and also the overall performance.

“We have more than 500 students in three streams and about 95 per cent have secured first division with 192 getting distinction,” she said.

Kaushik has also got highest mark in Alternative English with 99 pc.

In science, Pragjyotika’s Imdadul  Hussain  got the sixth rank with 468 marks while the seventh and eighth position in science stream were secured by students of Pragya Academy Junior College,  Riddhiman Sharma and Sukanya  Phukan with 471 and 470 marks.

Students of both Pragya and Pragjyotika secure ranks regularly.

Cofounder of Pragjyotika Achyutdeep Saikia said  that they were not bothered about ranks as the brighter ones were more involved in trying to crack the JEE Mains and Advanced and NEET exams.  “Last year, out of the five, who passed in the JEE advanced, four were from our coaching centre,” he said.

Co-founder of Pragjyotika Achyutdeep Saikia said that they were not bothered about ranks as the brighter ones were more involved in trying to crack the JEE Mains and Advanced and NEET exams.