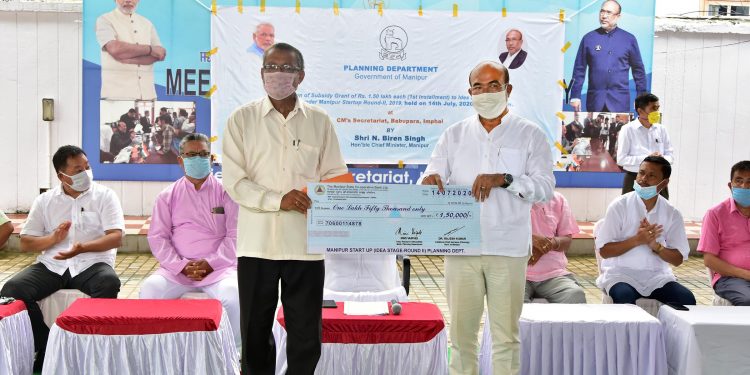 Manipur chief minister N Biren Singh on Tuesday handed over subsidy grant of Rs 1.50 lakh each under Idea stage Start Up to 146 beneficiaries for the Manipur Startup round II.

This first installment was given away at chief minister’s Secretariat, Babupara in Imphal.

It may be mentioned that the StartUp Manipur which was launched in March 2018 aims to enable the youths/unemployed persons in the State to take up new ventures with new and creative ideas.

An official website (www.startupmanipur.in) was also launched so that the interested person can visit the website to get register themselves and avail the benefits under the scheme.

Under the startup scheme, different companies have so far provided direct employment to more than 1000.

The subsidy given to those beneficiaries will help in promoting the state’s economy to certain extent.

The people of Manipur should have sense of responsibility only then a peaceful society can prevail in the state, the chief minister said.

Benefits are being to be provided selected individuals who have the vision for establishing their own business but are not financially sound.

The selected people were provided training and only those who have successfully completed their training were given subsidy grant by the Government.

Biren Singh said it is important to inform the general public about few success stories on startup scheme.

The State hired ambulance from Medilane related to covid-19.