With a view to further improve the health scenario in Assam, Assam Chief Minister Sarbananda Sonowal on Monday called on the founder chairman of Apollo Hospitals Dr Prathap Chandra Reddy in Chennai.

Sonawal had an elaborate and insightful interaction with the pioneering entrepreneur who has brought a revolutionary change in healthcare sector in the country through the group of Apollo Hospitals.

In a tweet in his official twitter handle, the Assam Chief Minister said: “Had an insightful interaction on the healthcare sector with pioneering entrepreneur, founder Chairman of @HospitalsApollo Dr Prathap Chandra Reddy in Chennai.”

The State Chief Minister also had an interactive session with SRM University Chancellor T R Pachamuthu in to discuss potentialities and opportunities in the education sector.

In another tweet, Sonowal stated: “Interacted with SRM University Chancellor T R Pachamuthu in Chennai and discussed potentialities and opportunities in the education sector.”

Sonowal is in Chennai to drum up support from investors down south for the forthcoming summit – Advantage Assam. Addressing a road show in Chennai, the Assam Chief Minister urged investors of Tamil Nadu focusing on sugar, chemicals, fast moving consumer goods companies based in Tamil Nadu to have tie-ups with Assam.

Sonowal also urged the Tamil film industry to shoot movies in Assam while addressing the road show in Chennai on Monday.

On Sunday, Sonowal had held a similar road show in Singapore. Earlier, he had had held road shows in Calcutta, New Delhi, Bangalore and Mumbai. 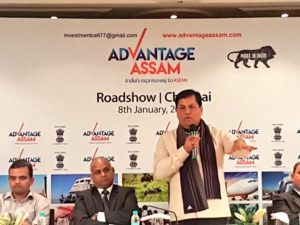 Sonowal also stressed on the tourism potential of the State, informing participants about the attractive tax incentives and capital subsidy announced by his government for tourism units. He further highlighted the undulated environment and biodiversity as the biggest assets of the State.