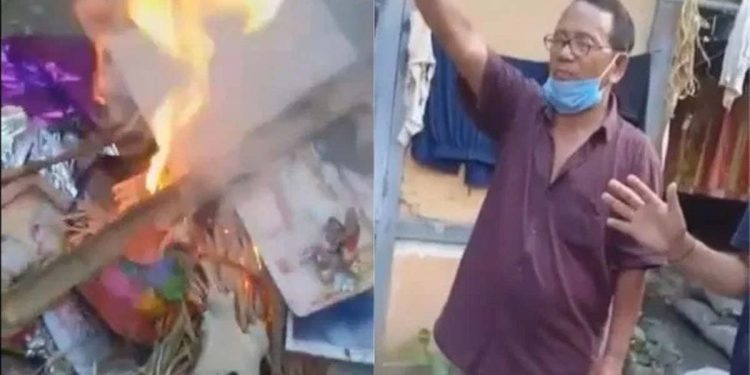 The Indigenous Faith and Cultural Society of Arunachal Pradesh (IFCSAP) has lodged an FIR at the Seppa police station against a pastor of the Pentecostal Church, Seppa, identified as Taye Kadu and two others.

The FIR has been filed against the three for allegedly burning down the sacred worship altar and the images and idols of Donyi-Polo, and other deities.

Seppa, the headquarters of East Kameng district, is around 215 km from Itanagar.

‘Donyi-Polo’ is the designation given to the indigenous religion of animistic and shamanic type of the Tani people of Arunachal Pradesh.

The name ‘Donyi-Polo’ means ‘Sun-Moon’ and was chosen for the religion in the process of its revitalisation and institutionalisation started in the 1970s in response to inroads made by certain other religions.

The FIR was lodged by the East Kameng district units of IFCSAP and Nyishi Indigenous Faith and Cultural Society (NIFCS) after a video of the incident went viral on social media.

The video has since received backlash from the netizens and several organizations of the state.

Condemning the incident, the IFCSAP in its statement said “it has hurt the emotions of the indigenous faith believers of the state as well as the nation.”

“Freedom of Religion is a fundamental right guaranteed by the Constitution of India. It, however, does not mean that one should demean and demolish other religions. The IFCSAP will never tolerate such humiliation against the indigenous faith believers,” Bai Taba, the society’s general secretary said.

Taba has appealed to the law enforcing agencies to punish the wrongdoers.

The NIFCS also condemned the incident and said “it is a deliberate attempt to insult and hurt the sentiments of the indigenous faith followers of the state.”

“We are not against any individual or group as everyone has the right to freely manifest his or her religion or faith. We, however, oppose the manner in which some pastors give out sermons, vilify and preach hatred against the indigenous faith and its religious structures,” NIFCS president Pai Dawe said.

Dawe said the incident is “a clear testimony of religious intolerance and it attempts to disparage the ideal of secularism being enshrined in the Constitution of India.”

“We urge the state government to give out clear directions to the authority concerned to immediately book the culprits and their associates under sections of the IPC and provisions of the Arunachal Pradesh Freedom of Religion Act, 1978 and award exemplary punishment to them,” he said.

The society has further called upon the state government to strictly implement the Arunachal Pradesh Freedom of Religion Act, 1978.

The Arunachal Pradesh Freedom of Religion Act, 1978 prohibits the conversion from one religious faith to any other religious faith by use of force or inducement or by fraudulent means and for matters connected therewith.

According to the 2011 census, around 30.26 percent of Arunachal Pradesh’s population is Christian, 29.04 percent Hindu and 26.2 percent of the populace practice other religions.