61 swab samples were sent to ICMR laboratory for COVID19 test, out of which 54 have been found negative 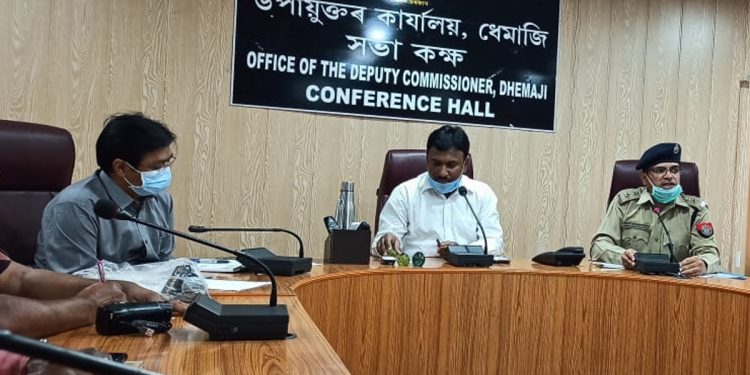 The Dhemaji Police have arrested 28 people so far for violating lockdown norms.

He also said the police have registered cases against two persons for circulating fake news on COVID19.

Ghanawat said, “Some anti-social elements are trying to create law and order problem in the district by circulating fake news, rumours and hate messages through social media.”

“The police are monitoring the activities on the social media. If anyone, found spreading fake news, hate messages or rumours, which could create communal tension or any other law and order problem, will not be spared,” the SP warned.

Meanwhile, the district police along with the excise department seized 12,940 litres hooch, including CMFL bottles during the lockdown period, which were destroyed following official formalities.

Four FPS licenses have also been suspended for adopting malpractices in the distribution of ration items.

The SP, who is a member of the District Under-trial Review Committee (UTRC), said following the Supreme Court directive, 26 prisoners have been released from the Dhemaji district jail to de-congest the jail as a preventive measure to contain the spread of COVID19.

Dhemaji deputy commissioner Narshing Pawar informed that the district has sufficient stock of food, medicines and other essential items.

The administration with the help of local NGOs and community-based organizations (CBOs) have distributed free food packets to about 4,000 poor families to mitigate food crisis during the lockdown period.

Pawar said he has instructed the Fair Price agents to issue ration items in a fair manner while the LPG distributors have been asked to ensure home delivery of the refilled cylinders.

The district administration has also ordered the financial banks to control the rush of the customers.

The Customer Service Point (CSP) owners have been directed to ensure home disbursement of the money released under PMJKY and other central schemes, he said.

Moreover, the administration has regulated the prices of food, vegetables and other essential commodities and warned the traders, agents, and vendors not to hike prices during the lockdown period.

Referring to the district health department report, the DC said the department is fully prepared to combat any eventuality caused by COVID19.

It has readied 350 beds in different locations of the district for isolation and quarantine of suspected COVID19 patients.

Besides, 10 additional Intensive Care Units (ICUs) have been set up in Dhemaji Civil Hospital to be used in treatment of COVID19 patients, if reported.

The district health department sources said a total of 61 swab samples were sent to ICMR laboratory at Lahowal in Dibrugarh for COVID19 test, out of which 54 have been found negative.

The results of the rest 7 samples are awaited, the sources said.

The 21-day nationwide lockdown was announced by Prime Minister Narendra Modi from March 24 midnight as a preventive measure to contain the spread of COVID19.