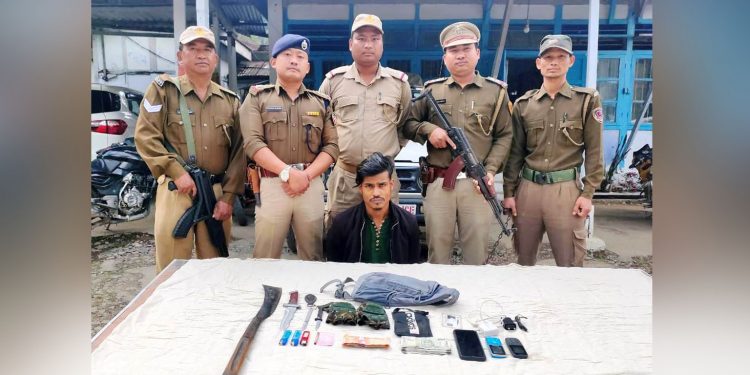 One Md Karim Khan aka Kalu, a man allegedly pretending to an NSCN member was arrested by the Arunachal police on Monday.

Allegedly Khan had carried out several extortions in Tirap district of Arunachal Pradesh.

Khan, a permanent resident of Lekhapani, Assam was arrested by the Khonsa police for carrying out a series of extortions from government officers, business establishment and other common citizens of the Khonsa town, officials informed.

Khan, allegedly, also made life-threatening calls from unknown numbers to people and demanded lakhs of rupees.

Following a series of complaints and inputs, the police swung into action and arrested Khan, who was presently living at the Town middle School area of Khonsa.

Extortion money of Rs 20900, traces of suspected brown sugar/heroin, a machete, three mobile phones along with 5 sim cards used for demanding extortion money etc were recovered from his possession.

Officials informed that a case under section 384/506 of Indian Penal Code read with Section 10/13 of the Unlawful Activities (Prevention) Act, 1967 has been registered against Khan and a detailed investigation is on.

As per police records, Khan already has a few cases registered against him at the Itanagar and Khonsa police stations and is facing trials for the same in different courts.

Riba has also requested the public and government officials not to fall prey to such extortionists.