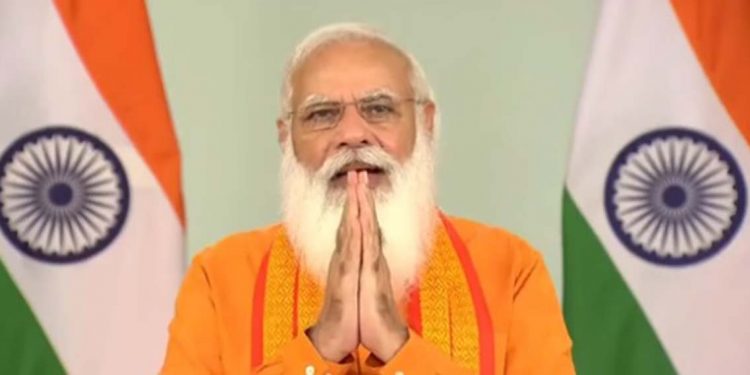 While the world has been fighting the Covid19 pandemic, Prime Minister Narendra Modi on Monday said yoga remained a ray of hope amid the crisis.

PM Modi said this while addressing the nation on the occasion of the 7th International Day of Yoga.

He said when the invisible virus of coronavirus knocked the world, then no country was prepared for it.

“We all have seen that in such difficult times, yoga has become a great medium of self-confidence,” Prime Minister Modi said.

“Yoga tells us that so many problems might be out there, but we have infinite solutions within ourselves. We are the biggest source of energy in our universe,” Modi said.

“We do not realise this energy because of the many divisions that exist. At times, the lives of people exist in silos,” the Prime Minister said.

“These divisions reflect in the overall personality as well. The shift from silos to union is yoga. A proven way to experience, a realisation of oneness is yoga,” he further said.

The mantra of ‘Basudeva Kutumbakam’ which India has followed since ages, is now finding global acceptance, PM Modi said adding, “We all are praying for each other’s wellbeing, If there are threats to humanity.”

“Yoga often gives us a way of holistic health. Yoga also gives us a happier way of life. I am sure, yoga will continue playing its preventive, as well as positive role in healthcare of masses,” PM Modi asserted.

“Now the world is going to get the power of M-Yoga app. In this app, many videos of yoga training will be available in different languages of the world based on the Common Yoga Protocol,” he said.

The event began at 6.30 am virtually on Monday.

The seventh International Yoga Day is being celebrated in 190 countries across the globe on Monday and the theme for this year is ‘Yoga for wellness’.